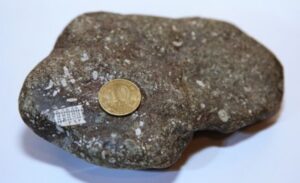 Near the town of Labinsk, Russia on the Khodz River, a local resident Viktor Morozov discovered a strange stone in which an incomprehensible walled-up object can be seen, suspiciously resembling a microchip, reports esoreiter.ru.

Despite the fact that this event took place several years ago, it does not lose its relevance, since scientists still do not have an unambiguous answer to this riddle.

The study of the stone was carried out by geologists from the South Russian State Technical University, who are sure that they were not mistaken with the dating.

The stone was handed over for a more thorough study at the Nanotechnology Center.

Researchers agree that an object embedded in a stone is very similar to a modern microchip, but some experts have compared it to a punch card used in computers in the 1980s.

Some scientists believe that the mysterious artifact in the stone is a fragment of a sea lily, which, 450 million years ago, very successfully blended into the rock and has been preserved in it to this day.

Other researchers have expressed more daring hypotheses, for example, that this microchip has been preserved in stone since the days of the existence of ancient civilizations, which are technically more advanced.

Some researchers believe that this may be a technology that is still unknown to modern scientists, which is why this artifact raises more questions than answers.