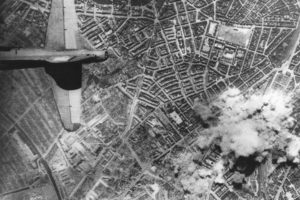 Reporter J. Bernard Hutton and photographer Joachim Brandt were working for a German newspaper, the year was 1932.

The 2 men were sent to the Hamburg shipyards to cover a local story when somehow, they found themselves right in the middle of a most terrifying and puzzling event.

After Hutton had gathered enough information for his story and Brandt had taken a few pictures, the 2 men were walking to the shipyard exit gate when they heard something overhead.

It was the familiar droning sound of aircraft and it quickly became louder. As Hutton and Brandt looked skyward they saw not 1 or a couple of planes, but a massive armada of British RAF bombers, the likes of which they had never seen before.

After what seemed like only seconds, huge explosions erupted all around them as bombs poured from the warplanes. As the 2 men ran towards the shipyard gates, and hopefully safety, Brandt took a rapid series of photos of the incredible event.

Hutton and Brandt did manage to escape the shipyard inferno and soon made their way back to the newspaper offices. When the 2 men related what had happened to coworkers and the newspaper editor the reaction they received was total disbelief.

Brandt’s photos showed nothing and a quick call by the editor to the shipyard cleared up the facts. There was no bombing of the Hamburg shipyards, there were no RAF planes spotted in the area, it was a normal day in every way. Hutton and Brandt were promptly fired.

What happened next to Joachim Brandt is uncertain, but J. Bernard Hutton moved to London. It was there, on Monday, July 25th, 1943, that Hutton was struck by a large newspaper headline and even bigger front page photo.

The story was about the British RAFs massive attack on Hamburg. The photo accompanying the story was exactly what Hutton and Brandt had seen in 1932.

Whether Brandt and Hutton experienced a timeslip into the future, or perhaps had an extremely vivid, shared premonition of future events will remain unknown.

What is known is that the bombing of Hamburg, or “Operation Gomorrah,” which some consider to have been a war crime, created a firestorm with temperatures reaching 1000 degrees C that killed 40,000 people.