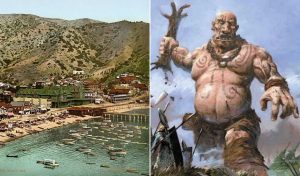 There are many myths that people or humanoid creatures of gigantic growth once lived on Earth. Evidence of this allegedly can serve as the remains that are found around the globe. One of the most intriguing stories on this subject happened on Santa Catalina Island off the coast of California.

Santa Catalina is a very tiny island located 22 miles southwest of Los Angeles. It is part of the Channel Islands archipelago.

Around 7000 BC, the island was inhabited by the Gabrielino Indian tribe (Tongva). In 1542, it was colonized by the Spaniards, then it came under the jurisdiction of Mexico, and later – the United States.

For some time, Santa Catalina was used as a transshipment base by smugglers and poachers. In the 1920s, magnate William Wrigley Jr. bought the island and developed a resort here.

But our history began even earlier, in 1896, when the Glidden family moved to the island. The Gliddens had a teenage son named Ralph. After he discovered the skull of an ancient Indian in the sands, Indian culture became his hobby.

The guy often wandered around the neighborhood in search of ancient burials. When he became an adult, he seriously engaged in archaeological excavations on the island. From 1919 to 1928, according to the man, he found 800 Indian graves, as well as various artifacts and relics. Ralph Glidden sold his finds to both museums and private collectors.

After Santa Catalina came into the possession of William Wrigley Jr., he imposed a ban on the sale of bones and artifacts found on the island, declaring them the exclusive property of the Field Museum of Natural History in Chicago.

But thanks to the fact that the Heye Foundation, with which Glidden collaborated, signed a contract with the museum to conduct excavations, he was able to continue his activities.

In 1924, the Heye Foundation stopped funding archaeological work, and then Ralph Glidden opened his own museum in the city of Avalon. Glidden named it the Catalan Museum of the Island Indians. He demonstrated his exhibits there and charged those who wished to see them for admission.

There were many skeletons in the museum that Glidden recovered from burials, and it was these that attracted the public the most. And once Glidden suddenly announced that he managed to find the remains of several people on the island, ranging in height from 7 feet (210 centimeters) to 9 feet (270 centimeters).

Moreover, they had a rather European appearance than an Indian – during their lifetime, apparently, they were fair-haired and blue-eyed.

One of the finds was the skeleton of a young girl, obviously not of simple origin, placed in a funeral urn. Around the urn lay the remains of sixty-four children. In different parts of the island, the remains of more than three thousand people were found. Almost all of them turned out to be men, and all were much taller than ordinary people.

All this became known from the words of Glidden. Immediately there was a buzz in the press. It was said that back in 1913, a certain doctor of German origin named A. Furstenan stumbled in the hard black sands of the Gulf of Avalon on a human skeleton 8 feet (240 centimeters) tall, next to which there were strange artifacts, in particular, a flat stone with carved on it mysterious symbols.

When the skeleton was brought to the surface, it fell apart into small fragments. Only the skull, jaw and foot remained more or less intact. 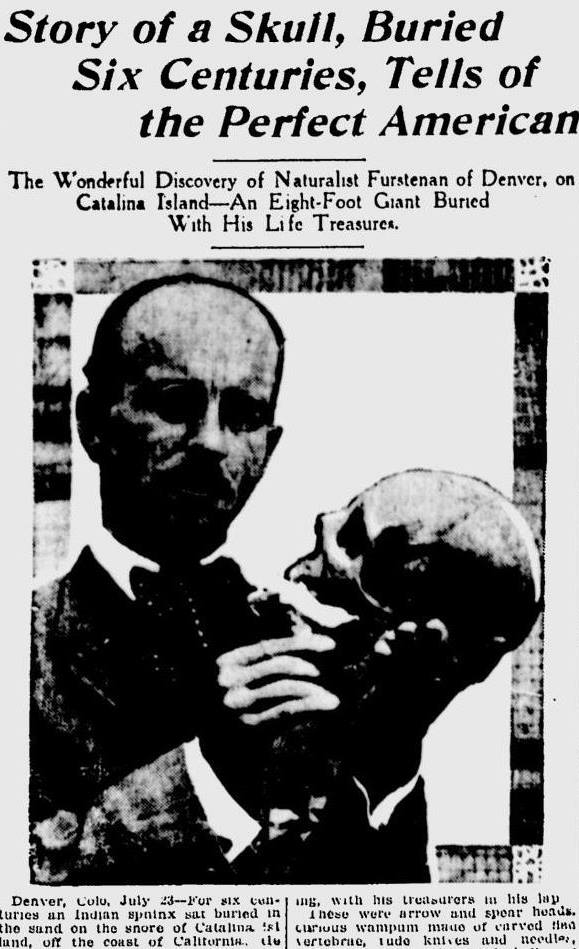 The claim of course generated widespread media interest, and in one issue of the The Ogden Standard-Examiner, Nov. 10, 1929, it was written:

“Glidden claims overwhelming proof that a fair skinned, fair haired, highly intelligent race of great stature lived on Catalina Island, off the southwestern coast of California, perhaps three thousand years ago, and that his excavation of a huge cache of skeletons, domestic utensils, urns, wampum, etc., is quite out of the ordinary class of Indian discoveries.

“A skeleton of a young girl, evidently of high rank, within a large funeral urn, was surrounded by those of sixty four children, and in various parts of the island more than three thousand other skeletons were found, practically all the males averaging around seven feet in height, one being seven feet eight inches from the top of his head to the ankle, and another being 9 feet 2 inches tall.”

There was also information that on the island of Santa Rosa, adjacent to Santa Catalina, in 1959, huge skeletons with red-painted skulls were found. The skulls had double rows of teeth in their mouths, and they had six toes instead of five on their hands and feet.

And one more interesting fact. A few years before Glidden, a German Naturalist Dr. A. W. Furstenan in 1913 unearthed an 8 foot skeleton with artifacts such as mortar and pestles and arrow heads on Catalina. He was told of a legend while in Mexico of a giant and noble race that lived on Catalina Island that existed long before the white man and had since vanished. 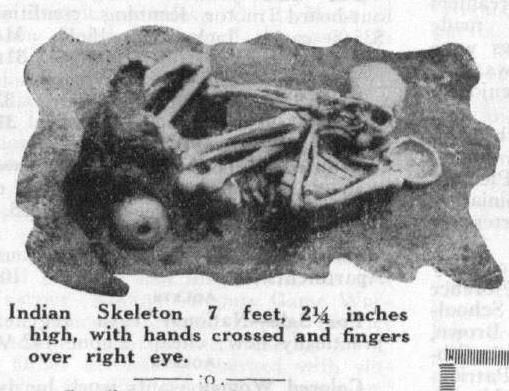 Representatives of the scientific archaeological community, of course, heard about the sensational finds on Santa Catalina, but none of them took this information seriously.

Many have decided that Glidden is simply trying to find “sponsors” for further excavations. There were even rumors that the skeletons in his museum were fake and bought in a gift shop.

According to some reports, a number of “giant remains” ended up at the University of California and the Smithsonian Institution, where they were closed in secret vaults.

There are photographs from the archive, which allegedly depict the same skeletons. True, there is a version that they are fake. Although the researcher L. Marzulli assured that the remains were real and that the sixth finger on the hand of one of the skeletons was clearly visible.

It is still unclear whether Ralph Glidden was just a hoaxer or whether he actually found the remains of representatives of an unknown race. Alas, so far there is not a single scientific confirmation that tribes of giants lived on our planet in parallel with humanity …

Ancient Hall of Records found in Romania kept secret since 2003

The Cover-Up Of Dvaraka’s Existence