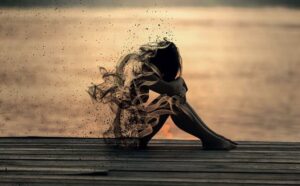 School time is really a magical time of life for some of young people, and not just figuratively. From time to time one of them will become the target of a disappearing act so thorough and confounding that it will leave the most intelligent of sleuths scratching their head and questioning the contents of their Calabash pipe. Enter Ruth Elizabeth Baumgardner.

In the spring of 1937 Ruth was just about to graduate with a degree in Art from Ohio Wesleyan University in Delaware, Ohio. She had good looks, good grades, was a member of Delta Delta Delta (how may I help ya’?) sorority and was freshly engaged to a boy back home in the Lakewood area of Cleveland.

On top of all this, Ruth was the daughter of a wealthy manufacturer that had just purchased her a brand new bright red Dodge convertible. By no stretch of the imagination should life have sucked for the blond haired, blue eyed and dimpled Ruth Baumgardner, yet here she is as the focus of a story on Booze & Boos Facebook page.

On May 4th of 1937 Ruth’s friends noticed that the nervous behavior she had exhibited for the past two weeks had been replaced with an excitement. Could these emotions have been caused by her fear that she wouldn’t have enough credits to graduate? Or maybe it was the big test that she had to take the next day? Perhaps it was related to the man who made several calls to the sorority house asking for Ruth?

Despite that “gee golly willikers” look in her eye, Ruth seemed to continue about her normal business that day: attending choir practice, studying for a test and visiting her sorority sisters at the Tri Delta House while donning hair curlers and a blue nightgown. Around 11 pm she called it a night and headed back to # 319 in Austin Manor, her private campus dorm room. Exit Ruth Elizabeth Baumgardner.

At 10:30 pm the next night her sisters reported her missing after realizing that she hadn’t attended any of the the day’s classes. Upon investigation, her room was found uncharacteristically neat and organized.

Her hair pins had been put back in their place, her nightclothes were hanging in the closet and her watch, sorority pin and loose change was left on the nightstand. Her alarm clock had been set for 6 am and was run down, which led investigators to believe she had awoken at that time and somehow left the building unseen.

The keys to her new car were found in the ignition and the car sat, untouched, in it’s regular parking space. Investigators found her dorm key secreted in the corner of a stairwell between the 2nd and 3rd floor with indicates that she had placed it there herself. 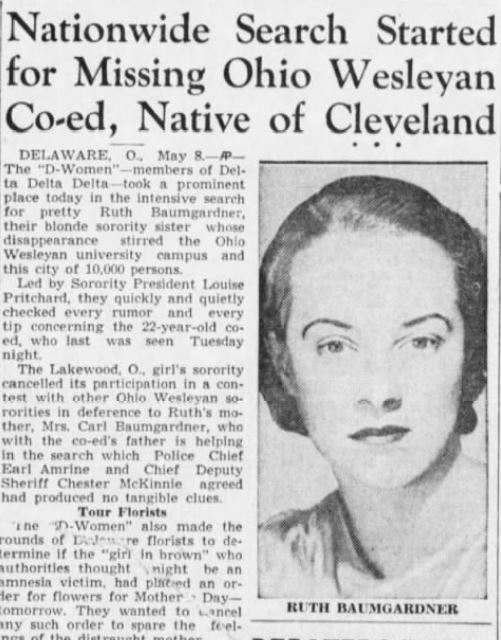 Aside from her daughter, the only thing missing from the dorm room, according to Mrs. Baumgardner, was an old handbag along with a brown suit, matching hat and shoes. At most, she would have had five dollars on her person.

So what became of Ruth on that spring day 80 years ago? It would seem that there is a theory for every conceivable possibility.

Some think she was in a family way with a boy other than her fiance and either died from a botched back alley abortion or eloped with the father. The elopement theory is supported by sightings of a young man and someone fitting her description in Zanesville the following day.

Other’s think she was a victim of sex trafficking. This is backed up by the confession of a convicted criminal who claimed she was abducted, drugged and taken to a brothel in Pittsburgh.

This is further supported by claims from an officer that raided the brothel and explains why her family, which had hired the best detective agency available, asked that the case be closed after two years and suddenly refused to talk about the matter.

Money wasn’t an issue for them so calling off the search seems suspicious and coincides with a rumor that she was located and secretly admitted to an asylum to hide the shameful scandal of a drug addicted prostitute daughter.

There is also the plain old rape and murder option. This theory is backed up by someone that reported screams between 2 and 3 am on the night Ruth vanished. Then there was the swimmer that claimed to have brushed against a human body during a dive in nearby Blue Limestone Park.

A subsequent search of the area by police turned up empty-handed, however. A paranormal research group also claimed to gain otherworldly evidence from a ghost box session in the basement of Austin Hall which confirmed that Ruth had been raped, had her throat slit and was dumped in the quarry of Blue Limestone Park.

Finally we come to option D) A little bit of all of the above. This theory suggests that Ruth had an unwanted pregnancy and met with a shady acquaintance who offered to help out. Upon meeting this man she was abducted, abused, had narcotics forced upon her and raped before being sold into prostitution in Pittsburgh.

When the private investigators hired by Ruth’s family finally located her they were so embarrassed and scandalized by the condition of their daughter that they had the whole thing covered up and quietly admitted her to an asylum to avoid any reputation damning gossip. While we will never know for sure, this theory seems to best fit the facts of the case.

Another interesting twist in the asylum theory came from a resident of Austin Hall’s fourth floor in the past decade. After an increasing frequency of unexplainable activity in the resident’s room, friends brought over a Ouija Board in hopes of a tête à tête with the offending presence.

During the session, repeated attempts to ask the spirit it’s name always resulted in the same answer: “W-6”. Eventually, the group tired of the confusing communications and terminated the session.

Later in the evening a guest was reading aloud through a list of chapters in a book and came upon one titled “Ward Number 6”. When someone commented on the similarity of the title to the name of the spirit from the Ouija Board a rhythmic rapping began to sound at the fourth floor window and continued throughout the night.

Not only is Ruth thought to haunt the dormitory that she vanished from 80 years ago, but a disgruntled cook and a small girl are often seen moving about in the space between reality and dream at Austin Hall. Could Ruth also be the girl that is seen among the many other spirits at Blue Limestone Park?

What I find most disturbing are the similarities between the disappearance of Ruth Baumgardner and Ronald Tammen Jr, almost exactly 16 years later at Miami University in Oxford, Ohio (see my post on Fisher Hall and the Marcum Conference Center). While I doubt we’ll ever find out what happened to Ruth, I hope that if she is stuck in those magical college years for eternity that at least she’s enjoying it.