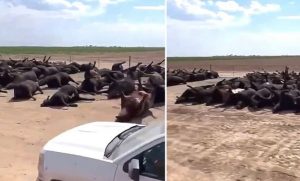 Recently, a video went viral on social media showing hundreds, if not thousands, of cow corpses lying on the ground. About 10,000 cattle are reported to have died in the United States for unknown reasons in a very short time, practically in just a few days.

In the state of Kansas these days there is an abnormal heat of 104.00 °F and it is the heat that is mainly to blame for the death of animals. However, not everything is so simple, in some central and southern states of the United States, elevated temperatures have been recorded for more than a year, but such a massive loss of livestock has not yet been seen there.

The Kansas Department of Health and Environment has officially confirmed the death of only 2,000 cows so far, according to Reuters, adding that this was due to high temperature and humidity.

In the meantime, it has been tweeted that more than 3,000 cattle suddenly died at one ranch in southwest Kansas last weekend and that similar cases are now piling up in the US.

There, on Twitter, one of the locals named Trucker Travis said that he did not believe the authorities, because he had never seen the heat kill cows in herds before.

🇺🇸 On a ranch in the southwest of the state of Kansas alone, more than 3,000 cattle suddenly fell dead last weekend. According to the farmers, there is no plausible explanation for this mass extinction. Cases like this are currently accumulating in the USA. pic.twitter.com/tj6vZ9uNGq

“Feedlots always have running water, and some farmers even deliberately water their cattle to keep them cool. Therefore, I do not know how this could happen if it was not someone’s negligence.”

A user with the nickname “Crypto-Liz Taylor” writes similar things:

Meanwhile, University of Kansas veterinarian A.D. Terpoff says the massive cow death was due to a combination of intense heat during the day and lack of cool nights, which “caused heat stress to the cows.”

At the bottom of the sea discovered “technology from the future”