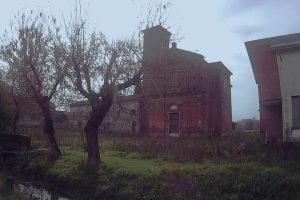 This story takes place in Brazil in 1923. The inhabitants of the village of Hoer Verde (about 600 people) suddenly and for some unknown reason disappeared without a trace.

A group of travelers who wanted to replenish their supplies of water and food came across a village abandoned by people. What they saw in the village shocked them.

There was not a single living soul in the settlement. Uninvited guests were met only by the wind, walking along the deserted streets. He sadly creaked the hinges of wide open doors, abandoned houses …

Travelers went into several houses. Everywhere the same picture was observed. Things and furniture were in their places. There were dishes on the tables, in which there was already sour food. No traces of a struggle or other evidence of a violent intrusion into the life of the village were found anywhere.

Frightened travelers hurried to leave this terrible place. They got to the nearest settlement and notified the authorities about what they saw in Hoyer Werde. A commission was sent there, accompanied by the military.

Careful inspection of the village brought results. In one of the houses, a weapon was found that had recently been fired, although where or at whom remained unknown.

The most terrible find was waiting for the investigators at the school. There, on a blackboard in one of the classrooms, an ominous inscription was found: “There is no salvation …”

However, these findings did not shed light on the fate of the villagers.

Different versions of what happened were put forward. It was assumed that the residents could leave due to political problems in the country. Perhaps because of the partisans hiding in the jungle. But 600 people is quite a lot. They did not appear anywhere and in any locality of the country.

Versions of a mystical nature were also put forward. Some researchers hinted at the intervention of aliens and the transition of residents to a parallel world.

The matter was quickly hushed up. It is possible that the commission still found some traces of the settlers. It cannot be ruled out that these traces did not fit into the picture of the familiar and familiar world.

Be that as it may, nothing is known about the fate of the 600 inhabitants of the Brazilian village of Hoer Verde…

Many references to this story exist, but most seem to be derived from an article translated from a Russian magazine which in turn may be based on some old articles in western media from the time.

This lack of information is one of the more perplexing elements of the Hoer Verde case as the level of detail the story goes to and the widespread nature of the tale at the time must have some origin.

Some say that this story was real, but at some point the authorities decided to remove the evidence of the existence of this story and removed it from the police archive.