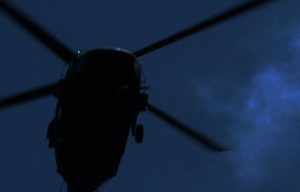 Mysterious black helicopters are causing concern and speculation as to who sent them and why they are buzzing the United States skies.

Since 1991, sky watchers all over the country claim to be concerned about a special type of black colored helicopter. These helicopters differ from regular choppers in that they are unmarked (showing no affiliation with any service or organization), painted a dull black color (some claim to deflect radar) have tinted windows and fly close to tree level in apparent disregard of FAA regulations.

The types of helicopters include all makes and models used by the United States Armed Forces including Hueys and Chinooks (long copters with rotors on each end). This mysterious helicopter phenomenon has been the catalyst of rumors that run from the ridiculous to the remotely possible.

The following are some of the theories gathered through newsgroups and articles on the World Wide Web in addition to the person on the street interviews from “observers” who have asked to remain anonymous.

What are these mysterious airborne vehicles up to? This depends greatly upon whom you ask. According to the website “The Truth about Black Helicopters” they are an alien life form that start out as little seedlings that burrow into cattle (or even humans) to gather nutrients from the host before burrowing out (sometimes bursting out, leaving the host dead) to start on their mission to take over the world.

This site includes diagrams and photos showing this process in great detail. These alien choppers are evidently responsible for many missing persons and dead cattle.

The most popular theories however, involve a confrontation involving superpowers here on earth. One of the most common threads discussed in “patriotic” newspapers and information newsgroups such as alt.conspiracy is that this is evidence of the “New World Order”, a takeover of the USA by a faction of the United Nations.

Some theories include major corporations like soft drink and computer companies who are working undercover to take the place of countries in the United Nations. This New World order is comprised of millionaire capitalists, or according to some, underground Communists. The power that is “taking over” civilization, as we know it changes depending upon the political persuasion of the observer.

All of the spotters do, however, agree that these midnight choppers are up to no good. According to followers of this phenomena, radio, TV and newspapers stories are being hushed about this and many of the calls that are made to radio stations and even police departments are being “rerouted” so that little attention is called to the problem.

A good question is, if some organization did not want attention paid to the copters, why would they be so conspicuous and fly so low? Some theorists reply that they are being deliberately conspicuous to terrorize citizens.

Where is this activity seen? Most of the sightings occur in the west. New Mexico, Texas, California and Nevada seem to be the prime areas of activity. Some theorists believe that these choppers are transporting material to and from Area 51, a spot in Nevada where the government is said to store UFO evidence and conduct top-secret research.

Some believe that the black helicopters are flying all over the United States, however, the western states have more wide open space with more visible horizon which makes them easier to spot.

What does the government have to say about this? As yet, most admit that there are no facts or verified quotes that would support or disprove any of the above theories.

Out of the many people who have an opinion on these mysterious aircraft, a small majority claim to have actually seen one. Mostly the reports are from someone who heard from someone whose cousin thought he saw one.

This lack of evidence or clarification of collected data does not prevent a great number of people from believing in these mysterious vehicles and the conspiracy theories that surround them.