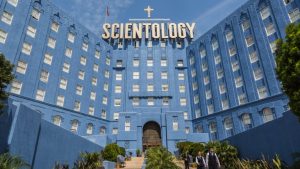 The Church of Scientology began when the New Jersey Board of Medical Examiners went against the Hubbard Dianetic Research Foundation. The Foundation was teaching medicine minus a license, which led to its bankruptcy.

This was in January 1951, and on December 1952, the Foundation filed for bankruptcy. L. Ron Hubbard also lost control of the Dianetics trademark. What kind of medicine was Hubbard practicing?

It begs the question to inquire about this because it drew the attention of a Medical Examiners’ Board down on him. With such controversy surrounding his science, it makes one wonder if he was working with forces beyond this world.

The courts gave control of the Dianetics and other copyrights to Don Purcell, the financier. Hubbard wanted Scientology to be considered a science. In 1952, Hubbard put this science into practice. He also published Scientology, a religious philosophy.

Marco Frenschkowski quoted Hubbard from a letter that was written in 1953, showing he was aware his approach originally to Scientology was not a religious one. “Probably the greatest discovery of Scientology and its most forceful contribution to mankind has been the isolation, description and handling of the human spirit, accomplished in July 1951, in Phoenix, Arizona,”

Hubbard said. “I established, along scientific rather than religious or humanitarian lines that the thing which is the person, the personality, is separable from the body and the mind at will and without causing bodily death or derangement.”

Hubbard’s observation, here, seems to be something from out of this world and that is based on advanced technology. His awareness of how the human operates on many levels would seem to be from another world and indicate a connection to another consciousness.

Hubbard also wrote a letter in April 1953, stating Scientology should be turned into a religion for all. With a declining membership and tighter finances, he talked about the financial and legal benefits of being a religion and started setting up Spiritual Guidance Centers. Here, customers would be charged $500 for 24 hours of auditing.

“I await your reaction on the religion angle,” Hubbard said. “In my opinion, we couldn’t get worse public opinion than we have had or have less customers with what we’ve got to sell. A religious charter would be necessary in Pennsylvania or NJ to make it stick. But I sure could make it stick.”

Saving money may have been a command that was given to him by the same consciousness or force that guided him earlier on in his previous letters. He focused the religion in three different churches: a “Church of Spiritual Engineering,” a “Church of Scientology,” and a “Church of American Science.”

This was in December 1953 and in February 18, 1954, some of his followers set up the first local Church of Scientology in California.

It’s interesting here how Hubbard went about setting up multiple churches. The interest here is whether the type of science and spiritual engineering was derived from aliens. It’s unlike any science that we had known prior or the general consensus humans have on the sciences such as biology and physics.

Hubbard could’ve been working with a science coming directly from extraterrestrials. These three churches were set up in Camden, New Jersey. 1955 saw the establishment of the Founding Church of Scientology in Washington, DC.

The Church’s claims of E-meters came under scrutiny from the US Food and Drug Administration (FDA), who began an investigation into the church, raiding their offices and seizing the E-meters along with different literatures.

This could be proof positive the government does not want to accept the science Hubbard came across or legitimize it because it might come from aliens. The Court told the Church to label every E-meter with a disclaimer it is simply an artifact of religion.

They had to pay a $20k compliance bond and the legal expenses of the FDA. Many said Hubbard’s teachings were contradictory, not because of a phone transmitter, but due to the ever-changing nature of the religion.

Some said all that belief required was faith in Hubbard himself. As 1966 came about, Hubbard left his position as Scientology executive director. He eventually formed the Sea Organization, utilizing three ships: the Diana, the Athena, and the Apollo, his flagship. He eventually announced a breakthrough discovery, where the OT III materials showed a method to overcome factors preventing spiritual growth.

The materials were given throughout the Sea Organization. While many say Hubbard’s science was not real, it could be that he was in touch with other creatures from another world. We might never know but it is interesting to ask the question as to whether his science simply was another world’s science and that his beliefs came from a consciousness beyond our world.

More Than Just Candy: The Magical Power of Chocolate