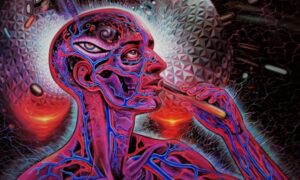 Psychedelics, the pineal gland, water fluoridation, the third eye and interdimensional portals—this theory has them all.

The main psychoactive in ayahuasca—a hallucinogenic brew used by Amazonian tribes for thousands of years—is Dimethyltryptamine, commonly known as DMT.

The process of successfully brewing this ritualistic drink requires a basic understanding of human biochemistry so it is unclear how the indigenous people of the Amazon rain forest managed to discover the hallucinogenic properties of the ayahuasca brew.

At the beginning of the 20th century, as the deepest parts of the Amazonian jungle were slowly being discovered, modern society gradually became aware of the existence of remote tribes and their shamanic practices permeated into western culture.

As a consequence, DMT was first synthesized in 1931 by Canadian chemist Richard Manske and in 1965 French pharmacologist Jacques Poisson isolated the compound from vine leaves used by the Aguaruna Indians that inhabit the jungles of Peru.

Since then, many of those who have studied or ingested DMT themselves reported that it was an astonishing substance, and its implications stretched far beyond our comprehension and almost certainly beyond the boundaries of our visible universe.

One of the most interesting aspects regarding DMT is that it is naturally found in many species of plants and animals and, despite the fact that it also exists in the human body, no one knows its exact function.

Dr. Rick Strassman conducted DMT research at the University of New Mexico in the 1990s, administering more than 400 doses to 60 volunteers. He believes that near the time of death, the pineal gland (a tiny organ in the center of our brains) releases a massive dose of DMT, which could account for the near death experience (NDE) phenomenon.

Throughout history, the pineal gland has been called the “principal seat of the soul” (Descartes) while various spiritual philosophies have linked it to the mystical third eye responsible for awakening and enlightenment.

In 2013, researchers conducted a study that showed DMT was found in the pineal gland of rodents, enforcing Dr. Strassman’s controversial hypothesis.

It was even suggested that DMT might play a role in escorting the soul into the human body before birth and out of it during death. The visions and out of body experiences of those who took DMT seem to solidify this claim.

They reported being transported to entirely different, yet somewhat familiar dimensions. These dimensions seemed to be governed or at least inhabited by humanoid beings that were always labeled as ‘otherworldly.’

Terence McKenna, a pioneer in the field of entheogens, once described these entities as “self-transforming machine elves.” Others reported contact with “other beings, alien like, insectoid or reptilian in nature, in highly advanced technological environments.”

Interactions with these creatures varies from person to person; while some have reported being “probed”, “tested” or even “dismembered”, others described being “loved and taught”, receiving crucial information regarding higher states of existence.

Are these encounters with “machine elves” nothing more than the product of a hallucinating brain or is DMT really the “spirit molecule”, as it was called? Can it lift the thin veil that allegedly separates dimensions or is it nothing more than a glorified psychedelic?

In an interview with David Jay Brown, Dr. Rick Strassman made it clear which side he’s on:

“I myself think so. My colleagues think I’ve gone woolly-brained over this, but I think it’s as good a working hypothesis as any other. I tried all other hypotheses with our volunteers, and with myself.

“[…]I tried a thought-experiment, asking myself, ‘What if these were real worlds, and real entities? Where would they reside, and why would they care to interact with us?’

This led me to some interesting speculations about parallel universes, dark matter, etc. All because we can’t prove these ideas right now (lacking the proper technology) doesn’t mean they should be dismissed out of hand as incorrect.”

Many thinkers share Dr. Strassman’s views. Author Graham Hancock believes DMT is a common denominator for phenomena such as “hallucinations, angels, aliens, dreams and near death experiences.” His own research has turned up evidence for the use of DMT in many ancient cultures, and it can be found in religious symbols from all over the world.

In the U.S., DMT is a Schedule I drug and can only be legally used by certain religious organizations such as The Church of the Holy Light of the Queen or the Brazil-based União de Vegetal.

Conspiracy theorists are convinced that DMT is illegal because of its third eye-opening properties. Moreover, some believe that the Fluoride present in tap water is specifically designed to inhibit the function of the pineal gland and thus prevent any relevant means of communication with other dimensions.

At the moment, it appears that any scientific studies centered on DMT tend to produce more questions than answers and the lucid hallucinations caused by high doses of this psychoactive compound have yet to be properly explained.

The work of Strassman and other open-minded researchers could be the first modern steps toward establishing communication channels with beings from higher dimensions. If their efforts turn up something, it will only strengthen the idea that present-day science is only rediscovering knowledge that the ancients possessed thousands of years ago.

The knowledge that was perhaps handed down by the machine elves.