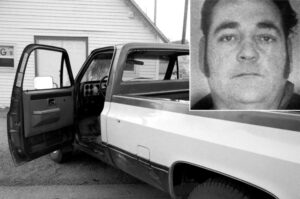 Life in small town America is increasingly romanticized as more and more Americans move to cities. Pop culture likes to portray rural hamlets as idyllic places with quirky citizens who are full of homespun wisdom, getaways where the materialistic city dweller can vacation away from their stressful urban lifestyle and maybe learn a few life lessons while they’re at it.

While there is perhaps some truth to this, another trope about small towns is that they all harbor deep, dark secrets whose truths are not easily discovered.

After all, small towns are in reality large families, with a sense of identity that comes from close kinship among its members. Secrets die hard when a community closes ranks and refuses to talk.

Skidmore, Missouri was just such a town. On July 10, 1981, the town’s most notorious member, Ken Rex McElroy, was gunned down in broad daylight in front of thirty or forty townspeople. More than 30 years later, authorities are no closer to solving the mystery of who pulled the trigger.

Ken McElroy was the terror of Skidmore. A big man with a bad temper and no conscience, he did as he pleased and if anyone had the audacity to get in his way, he didn’t hesitate to resort to violence.

His reign of terror over the 437 residents of Skidmore lasted for decades. From assault, to rape, to theft, McElroy was such a prolific criminal that his attorney, Richard McFadin, claimed to have defended his client from upwards of three felony convictions a year.

McElroy, who never seemed to be hurting for money despite never holding down a job, paid his attorney in cash whatever amount was necessary to stay out of jail.

The strategy seemed to work, because despite a laundry list of crimes, law enforcement could never make any charges stick to McElroy.

It seemed that the bully would continue to terrorize Skidmore Indefinitely. That is, until McElroy tried to murder the local grocer, the elderly Bo Bowenkamp, over some candy.

Trena McElroy, Ken’s wife, told her husband that Lois Bownenkamp, the grocer’s wife, had accused their daughter of stealing candy.

Mrs. Bowenkamp tried to soothe the hurt feelings by explaining away the incident as a misunderstanding, but Ken McElroy, never one to let matters drop, offered the elderly woman money to fight Trena McElroy over the dispute.

When she refused, McElroy camped out in his pickup truck outside the Bowenkamp’s home at night, on two occasions firing his shotgun into the air.

One July night in 1980, McElroy took the dispute to dangerous proportions. Bo Bowenkamp stood on the loading dock of his grocery store, waiting for a repairman. McElroy pulled up in his pickup truck, pulled out his shotgun, and unloaded a round of buckshot at the elderly grocer.

The round tore through Bowenkamp’s neck, and the old man collapsed. McElroy fled the scene, but was picked up later that night by State Troopers. Bowenkamp survived his wounds. The town was outraged by the attack, calling for justice.

McElroy would subsequently go to trial, but justice grinds slow, and the bureaucratic court system would once again fail Skidmore, setting the stage for an act of vigilante justice that remains unsolved to this day.

Ken McElroy received a two year sentence for shooting Bowenkamp. McFadin put in an appeal, and much to Skidmore’s dismay, McElroy was freed on bond.

He showed up in the D&G Tavern with a rifle, telling the bar dwellers that he intended to finish the job he started the previous year. Carrying the rifle violated his bond, and several witnesses agreed to testify.

But once again McElroy was able to duck his comeuppance, because his lawyer was able to postpone the bond hearing. Skidmore was infuriated, and some among the villagers decided enough was enough.

On Friday July 10, 1981, Ken and Trena McElroy drove into town in Ken’s signature pickup truck. McElroy pulled up in front of the bar and went inside for some cigarettes. A large crowd gathered, including patrons from the bar. McElroy started his truck and lit a cigarette. 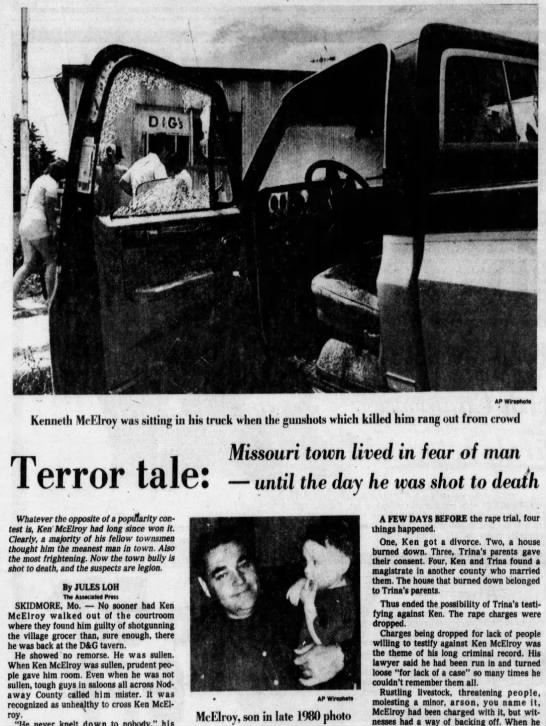 Shots cracked through the morning stillness, coming from both in front of and behind the truck. McElroy was struck several times in the head and neck.

No one called for an ambulance, and when sheriff’s deputies arrived, no one but Trena said they saw anything. The wall of silence went up that day, and to this day it remains standing.

More than thirty years have passed since that July morning when Skidmore gunned down its most notorious citizen.

Those years have not been kind to Skidmore—its population has shrunk by nearly half, and the local grocery, the bar and the gas station have all closed down. Many of the protagonists in this strange story have moved on or passed away.

Meanwhile, the murder of Ken McElroy remains an open case, one that law enforcement will not solve anytime soon.