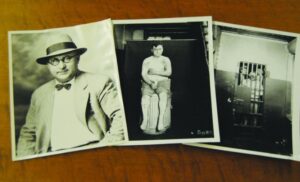 Every so often I’ll get homesick and break form to tell you a story about where I grew up. With the current possibility of a serial killer in the vicinity, my mind goes back to the horrifying and little known tale of the “Bluebeard of West Virginia”, Herman Drenth a.k.a. Harry Powers a.k.a Joseph Gildrow a.k.a. Cornelius Pearson, and on and on.

While Herman’s only confessed murders took place just a few miles down the road from my home, I heard nothing but vague rumors of the area being haunted growing up.

It was just a few years ago when, driving with my father, he made the nonchalant comment “Over there is where the murder farm is.” My eyebrow raised so hard and fast that it nearly punched a hole in the car’s roof. And then the research began…

Herman was born in Holland in 1892, and was originally and appropriately named Harm. He was known to be a difficult child that was prone to lying and stealing. Herman’s parents sent him to the U.S. at the age of 18, either to straighten him out or because they were scared of him.

As a young man in Iowa he was caught torturing farm animals and was busted for stealing a car but escaped prison with the help of his girlfriend. By 1921 he was doing time in Wisconsin for burning down the house of a girl he was interested in after she married another, just like TLC’s Left-eye Lopez.

It was after his release in 1922 that Drenth began utilizing “lonely hearts” mail order agencies to fleece gullible women of their money and lives. While there is no way to get a clear number of Drenth’s victims, those that we do have details about are down right bone chilling.

In 1924 he moved to Cambridge and later Mansfield, Ohio where he drugged his wife’s tea with sleeping pills. When she woke up her valuables and husband were missing but at least she avoided the nightmarish end that many of his other victims met.

In 1927 Drenth settled down in Quiet Dell, West Virginia with another wife, Luella Strother. By May of 1928 Drenth rose to management at a local vacuum sales company when his boss, Dudley Wade, mysteriously vanished.

Drenth accused his boss of pocketing the proceeds of a large number of missing vacuums and running off with the money. Later the missing vacuums would be found in Drenth’s garage but the whereabouts of Wade’s remains are a mystery to this day.

In July of 1929 a Cleveland nurse named Golda Brown was found poisoned with a suicide note written in unfamiliar handwriting beside the body. Her father was informed of the death by a letter signed with one of Drenth’s many aliases. As her father was identifying the corpse a man fitting Drenth’s description approached Mr. Brown and advised him to “grab the body and get the hell out of town.” 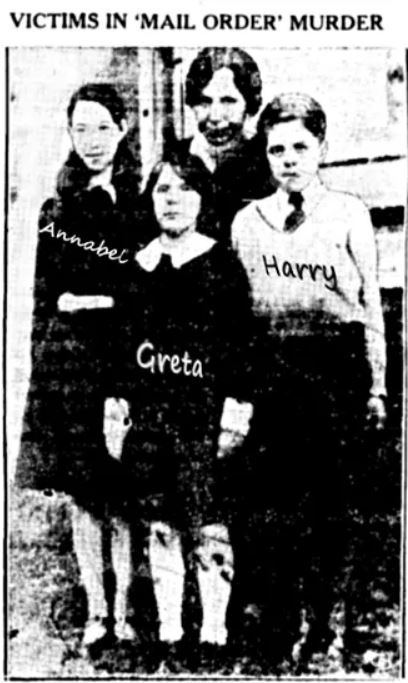 The next year is a quiet one. Either Drenth was busy learning the ropes at the grocery store he and his wife were running or he was extra careful with his murders. There was only one account where a landlady in Morris, Illinois identified Drenth and his car in the case of an unsolved murder there.

After complaining of a stifling odor emanating from the garage that Drenth was renting, she says he left town and hours later the body of an unknown female was found wrapped in burlap on the side of the road. By this time Herman had nearly finished construction on a barn at his home in Quiet Dell, a barn with a very unusual basement.

Continually nurturing his predator/prey relationships via lonely hearts ads, Drenth returned to Illinois in June of 1931. This time he went to pitch woo to the wealthy widow, Asta Eicher and her three children Greta, Harry and Annabell.

After a few days he swept Asta and her children off to his home in Quiet Dell. Upon their arrival he seemed anxious to get everyone settled in to their new home. There was just something he needed everyone to help him with first. Something out in the barn…

Underneath the barn Drenth had built a secret torture chamber where he starved and gassed the family as he watched and pounded his pudd. Later, at his trial, Drenth described his little “workshop” as a million times better than any cat house he had ever visited.

After torturing the Eicher family for several days he decided to cage the children so they could watch as he hung the family one member at a time.

This plan didn’t quite work out as 12-year-old Harry started screaming at the site of his mother hanging from a noose and Drenth had to obliterate his skull with a claw hammer to silence the child. 14-year-old Greta and 9-year-old Annabel died like their mother, however.

Shortly after, Drenth was seen with a local shoe shop owner, Stamatifos Sfikas, the day of his mysterious disappearance. Sfikas body was found with a gun shortly after Drenth’s trial began though his death was never officially linked to the killer.

Before the ground where Drenth had buried the Eicher family had time to settle, Dorothy Lemke of Northboro, Massachusetts arrived with her checkbook and wedding dress. Poor Lemke suffered another cruel death.

She was starved and suspended from the rafters with a bucket of food hanging from her neck, just out of reach from her mouth, for hours. After days of torture she was strangled with a belt and buried with the others.

Fortunately, it was shortly after this that police caught up with Drenth while investigating the disappearance of the Eichers and discovered his blood-soaked torture chamber.

After a body-filled ditch was found on his farm, Drenth was subjected to a brutal third degree where police broke his arm and nose, placed hard boiled eggs under his arms (?!) and used sleep deprivation to get him to confess to the murder of the Eichers and Lemke.

When asked about other victims Drenth would shrug his shoulders and say “I don’t know. You’ve got me for 5 murders. What good would 50 do?” Despite finding evidence in the barn that could link Drenth to other murders, the authorities seemed to agree. Another chilling detail is that they found letters where he was in correspondence with over 200 other women, many of whom he had marked for death.

Herman Drenth was hung in Moundsville, West Virginia on March 18th, 1932. His wife refused to claim the body and he was buried in a pauper’s field in Tom’s Run Valley.

Neighbors claim to hear screams coming from the barn, which still stands to this day. In 1955 Charles Laughton cast Robert Mitchum to play Drenth in his classic film “Night of the Hunter”. Because Drenth was described as a pudgy, pig-faced man, I’ll never understand why he didn’t go for an animated feature starring Elmer or Porky instead.

There you have the long and disturbing tale of the Bluebeard of West Virginia, Herman Drenth.