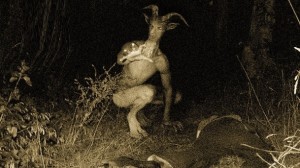 Legends say that the old cobbled way stretching from Corbridge to Berwick, in Northumberland, known to some as the Devil’s Causeway, was built by a race of giants called the Yotuns, or Ettins. Not far away, near Alnwick, the Wooley Man of Rugley has been sighted over centuries.

The Newcastle antiquarian Richard Heslop (1842–1916) reported legends of a mysterious wild hominoid creature known in the Cheviots as the Broon Man o’ the Moors. Monster or lost cave-man?

Another mysterious creature recorded in our local legends is the shape-shifting spirit known as a braag. At Low Fell, in Gateshead, people feared the nightly apparition of the Portobello Braag. At Pelton, County Durham, another would appear in the shape of an ass, luring people into dangerous swamps and marshes.

Braags were often associated with marshes, which were real death-traps before the marshlands were drained to become farmland in recent centuries.

Up on the moors other evil spirits such as Jinny-o’-thi-lantern would use mysterious blue lights to lead the unwary off the safe paths – and to their death.

Miners in the Pit-village of Callington feared a boggle (an evil spirit) that haunted their colliery. They believed the boggle would try to cut the ropes (the soams) on which the pit- men’s lives depended. So they called the boggle “Cutty Soams”.

Various cantrips (traditional Northumbrian magical charms) were used as protection from braags, boggles and witches. Rowan, witchwood and purple clover were planted around homes, and talismans such as holey-styens (stones with holes) were placed above doors as protection against the dark forces.

The antiquarian John Trotter Brockett (1788-1842) wrote that it was in the remote and upland areas that superstition held sway and that in the far hills of the Northern Cheviots there remained the strongest belief in the existence of elves and fairies, or “queer fwoak” as they were known.

These folk-beliefs of the time bear no resemblance to the sweet fairies we see on Disney cartoons. The rural communities of Northumberland and Durham, as elsewhere in Europe, saw fairies and elves as a serious threat to their families, their homes, their livestock, and above of all to their children, who could be stolen by the fairies and replaced with a changeling. 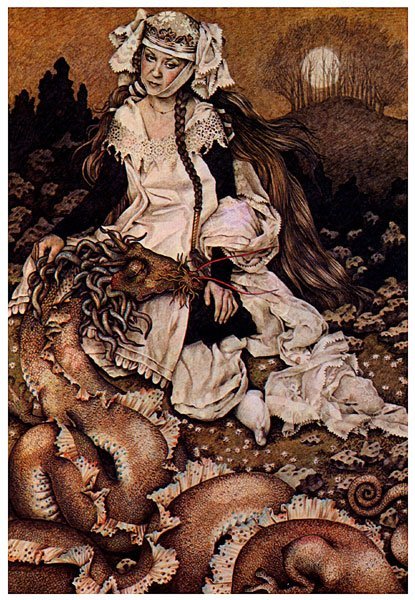 A painting of the Lambton Worm

Criminal cases were brought as late as the 19th century against individuals who had attacked or even killed family members suspected of being changelings. In Northumberland and the Borders some superstitious families believed that their real children had been abducted to Elfhame (the dreaded fairyland of Alfeim in Norse mythology).

Among the most frightening creatures of Northumbria and the Borders were the troll-like race known as Redcap. These goblins always appeared in the form of old men, with bright red hats. But they were no garden gnomes. Their caps could only retain the cherished redness by being bathed in the blood of recently murdered human victims. The Redcaps were to the Cheviots of Northumberland and the Borders what the vampires were to the Carpathians of Transylvania. No surprise then that our own Border Dracula, the dreaded Lord de Soulis of Hermitage Castle, had his own Redcap as a personal familiar.

While the braags were often found near to swamps and marshes, the hills and mountains were the home of monsters, evil fairies, hairy dark wild-men, and goblins, of which Heslop says the duergers, a race of Cheviot trolls, are “the worst and most malicious”.

But some spirits and creatures that came further down the hills and into the valleys and farmsteads of lowland Northumbria could be much less frightening. There is a particularly strong Northumbrian tradition of helpful spirits such as the Hobthrush, that would come at night and perform tasks to help the human farmers. The more menial the task, the happier the Hobthrush would be.

The Hobthrush was a very diligent worker, but he would seek no payment of any kind. If the farming folk left any gift to show their appreciation he would vanish as mysteriously as he had come, never to return. The most noted Hobthrush was that of Elsdon Moat. He wore a tattered hat and would spend his nights doing all sorts of drudgery to help his human hosts.

But when the farmers wanted him gone, they would just leave him the gift of a new hat, and they would be left in peace.

Closely related to the braags, and just as wicked, were the gyests, sometimes called ghests or bargyests. These evil creatures would also seek to frighten people, and lead them away from a known and safe road to their miry and marshy demise, or perhaps lead them to walk in the darkness of a Cheviot night over the edge of a precipice. Often taking the shape of horses, donkeys or monstrous large dogs, gyests could also shape-shift to appear as men, or even stacks of hay. But always their intention was to trick humans, for their own amusement, and lure them to their doom.

Gyests have been associated with various places in Northumbria, from the heart of Tyneside to the far reaches of the region. Brocket tells us that the streets of Newcastle were haunted by a nightly gyest which would assume the shape of a dog, a calf or even a pig to terrorise the good people of the town, and was particularly active around Dog-Loup-Stairs.

There were several names for the terrifying creatures of the night that haunted Northumbrian villages of old: gyest, boggle, wirrikow, or just kow, such as the famous Hedley Kow, which played tricks on the villagers of Hedley-on-the-Hill. The tales of this creature were recorded by the 19th folklorist Joseph Jacobs (1854-1916). While being a much less threatening monster, the Hedley Kow’s main characteristic was again the ability to change its shape and play tricks on those gullible humans who should perhaps realise that in life nothing is really quite what it seems.

Dragons were represented in our tradition by the serpent monster known locally as a worm (two syllables and rhymes with forum). Of course the most famous of these dragons was the Lambton Worm. But the monster in the popular song, that was so big it coiled itself seven times round the Hill of the Penshaw Monument, was not the only monster of that ilk.

There was also the Sockburn Worm of County Durham, and the Wode Worm of Worniston, and most mysterious of all was the Laidley Worm of Spindleston Heugh, near Bamburgh, the ancient seat of Northumbria’s kings.

The tale of the Laidly Worm (which means Loathsome Serpent or Hideous Dragon in Northumbrian) has a different twist to the magical theme of shape-shifting, because this dragon was actually a beautiful Northumbrian princess. When the king, her father, had died, the princess’s evil step-mother became queen at Bamburgh, and turned the young maiden into the hideous dragon. But the princess had a brother in Norway, who returned to Bamburgh and brought his sister back to human form with a single kiss.

Many of the Northumbrian legends have some Scandinavian element or are based on Nordic mythology. The braags of Northumbeland and Durham were close cousins of the baekhest, the shape-shifting horse-spirits of Nordic folkore, and the hobthrush who would visit remote farms at night to protect and do chores for the sleeping human family shows a striking resemblance to the Tomte of Norway and Sweden.