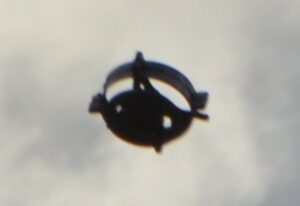 At noon that day, a mysterious object fell from the sky and landed close to the home of Thomas and Maud Hutchinson. The object was egg-shaped with a saucer-shaped base; 3feet high and 18inches in diameter; and red, with dark red stripes and dark red marks at each end.

It appeared to be made from canvas. initially, the object was motionless – apart from righting itself after Thomas kicked it over, but after a while, it began to spin on the ground.

Thomas grabbed the spinning object with the intention of taking it to nearby Loup police station. But, after something of a wrestling match, the object escaped.

“Then all of a sudden the monster rose and it nearly pulled my husband off his feet when he tried to hold it,” Maud told reporters. “I started to panic and then I ran home and prayed.”

Then the mysterious object disappeared from sight.

The incident was widely reported and sparked a lot of interest, particularly in the US, where one newspaper exclaimed: “To see a ﬂying saucer is no longer unusual. There have been those persons who claim to have ridden in them and talked to their occupants. But to wrestle, even if the match was a losing one, this is a new twist.”

But, the authorities here didn’t share this excitement. An officer at RAF Aldergrove was “nearly certain” that the object was just a weather balloon. The Royal Ulster Constabulary (RUC) – Northern lreland’s police force supported this view.

It wasn’t without precedent. On 16 February 1955, rumours that a ﬂying saucer had landed spread quickly in Ballinacargy, County Westmeath, when 15-year-old Leo Penrose saw an object land in a field near the village.

On that occasion, the Gardai – the lrish police – quickly established that the object in the field was just a weather balloon.

However, no one was able to explain the Moneymore weather balloon’s spinning motion, or its speed of departure; and no one was able to identify where the balloon had come from. And there seemed to be some dissent within both the RAF and the RUC.

An RAF officer interviewed by the Grimsby Evening Telegraph said that the device did not belong to them, and that he couldn‘t “even hazard a guess” as to what it might have been.”

And the desk sergeant at Thomas and Maud’s local police station found it hard to believe that Thomas had been fooled by a weather balloon.

“Thomas Hutchinson is a level-headed, God fearing chap,” he said. “He’s not the sort of man who would imagine he seized a ﬂying saucer if, in fact, he didn’t have one.”

The Moneymore incident brought to a close this period of UFO activity in Ireland. There would be others, but this was the first. And while much of what was reported could be readily explained, a few mysteries remain.

Who Will Resist the Aliens Who Want To Destroy Us?