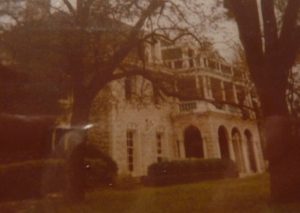 Perhaps, one of the most popular urban legends of San Antonio, Texas, is the politically incorrectly named “Midget Mansion”.

There are a few differing versions of the legend, but this one goes as follows. In the early 1920s a wealthy family of little people, a father, mother and two children, moved to San Antonio, the father having made his fortune as a businessman.

He had always resented having to live in houses that were built for normal sized people. So with his money he designed and constructed a tiny mansion for his family, designed specifically for their needs. This included shorter ceilings, tiny staircases, doorknobs that were within reach, even toilets that were designed to be lower to the ground.

It was entirely built to scale, down to the last detail. He also built several houses next to the mansion for small people that were the servants quarters, even though for some reason, he hired normal sized people as housekeepers and servants. Possibly because of the discrimination they had faced all of their lives, the midget family are said to have hated normal sized people.

They took their anger out on their servants, treating them very poorly. The servants were forced to live and work in tiny, cramped and very confined spaces that were intended only for little people. The midget family enjoyed watching their tall servants struggling to cope with their midget surroundings.

The mistreatment went on for a long time, until finally the servants snapped and plotted their revenge. This revenge was to take the form of murdering the entire family and stealing the money they felt was owed to them. They made their move on one dark night, charging inside the house and killing each and every one of the family members with an axe.

The bodies were tossed into a bedroom closet on the second floor. The servants grabbed the money and left, but not before sending the Mansion up into flames on their way out the door. Firefighters appeared on the scene shortly afterwards and managed to quench the flames, and the horrible crime was soon discovered, when they discovered the mangled and mutilated bodies of the family up in the bedroom closet.

It is said that the servants themselves were not to benefit from their crime for long, they soon became frustrated over how to split up the money, and ended up murdering each other over the same bloody money that they’d stolen from their employers in the first place.

Maybe because of its bizarre history, the property remained vacant for many years. It came to be known by locals as Midget Mansion and neighbours said that it was haunted. They heard screams and saw figures moving about inside the house even though it was vacant.

People who have visited the mansion claimed to hear strange sounds of scratching coming from inside the walls. The sounds seemed to be loudest in the bedroom closet.

For years, this mansion attracted hundreds of high school students on Halloween night daring one another to knock on the front door and provoke the unseen inhabitants into action. In some cases, owners of the Mansion actually discovered fresh scratch marks on the walls.

Locals claimed that the place was haunted by the restless spirits of the victims. Slowly but surely, offers for the house dried up and it sat empty and abandoned for a good many decades until it was finally demolished and turned into apartments, which some believe to be home to the new Promontory Pointe Apartments.

Mysterious Rescue Of Passengers From The Ice Ship