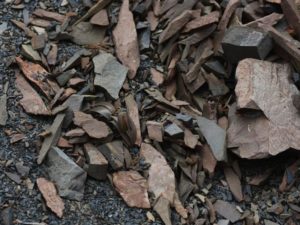 In places where people harvest the most aggressively, the color of the plant has changed to blend in with rocky terrain. Do you see the plant in this photo?

This small brown Fritillaria delavayi acquired camouflage in response to intense human harvesting. The more a plant mimics its environment, the more difficult it is for people to find and collect the plant.

This very popular plant used in traditional Chinese medicine has created a camouflage pattern for itself, making it difficult for humans to detect and collect, according to scientist Jonathan Lambert.

This plant, Fritillaria delavayi, grows on the rocky slopes of China’s Hengduan Mountains, and its dried bulbs have been used for over 2,000 years to treat heart and lung conditions.

Historically, this plant was not hard to find – a bright green twig against a sea of ​​gray scree – but the demand for the powder made from its bulbs made it more rare and expensive. A kilogram of powder now costs $ 480 and requires more than 3,500 individual plants to be harvested.

But just as many animals have evolved camouflage to better avoid predators, human behavior during harvest prompted many Fritillaria plants to go from bright green to muted gray and brown in the stones they grow in between, researchers report in a study published this week in Current Biology.

The researchers also found that this effect is especially pronounced in areas where plants are most actively pursued by people who want to pluck them.

“Like other camouflaged plants we studied, we thought the evolution of camouflage on this plant was caused by herbivores, but we did not find such animals,” says Yang Niu, a botanist at the Kunming Institute of Botany and co-author of the study in a statement. “Then we realized that people can be the cause.”