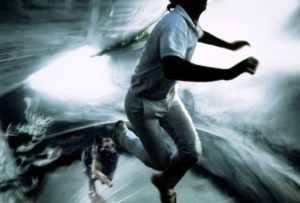 Chase dreams can express Shadow fears or terror over being stalker by ominous waking life forces. The chaser is the key to discovering what those forces are.
One of the top ten most frequently experienced nightmares, chase dreams have s number of interpretations.

Their symbolism ranges from the obvious representation of running from something in waking life, to being expressions of the shadow archetype.

When the chaser is identified as a known person, that person may be better interpreted symbolically rather than literally.

A chasing spouse can symbolizes overwhelming domestic concerns or feeling that one isn’t meeting those responsibilities.

Pursuit by an ex in a dream symbolically means the dreamer is running from unresolved relationship issues rather than literally attempting to elude the ex.

The pursuer can also be interpreted from the angle of time as well. If related to a significant time in the dreamer’s life, the stalker can actually represent that time period. Finding present and past time parallels can lead to interpretations containing insightful information.

In the broad sense, dreams of being chased by animals symbolize primal fears of being hunted or stalked. They can symbolize fears and feelings of being “eaten alive” in the waking world.

Additional interpretations can be gleaned by learning about the symbolism of the specific animal involved in the chase.

Unknown pursuers chase epitomize the fear of the unknown. Some involve a visible person the dreamer does not know; in others, one flees a faceless entity or shadowy stalker.

The unknown pursuer symbolizes fears that some ominous, hidden, and unpredictable event or person is coming closer, closing in, threatening complete destruction of the waking world.

The stalker often symbolizes deep-seated, fear-based control issues. Micromanaging one’s own life as well as those of others are vain attempts to plan for and insulating life from any and all unpredictable tragedies, pain, or misfortunes. For those micro-managers, the unknown hunter embodies all those events the dreamer cannot possibly control.

These dreams are also expressions of panic that are often centered on guilty emotions. Something from the dreamer’s past or some present situation is catching up, threatening waking life exposure and humiliation.

One way to identify the pursuer is to pay attention to the dream’s details, such as the its setting.

Chase dreams are often recurrent nightmares involving similar or identical characters and themes. Sometimes the reason for recurrence is due to unresolved emotions over unexpected, traumatic life events.

For example, a brush with death in a medical setting can lead to recurrent dreams of being chased through hospitals or doctor’s offices. In this case, the dream is a manifestation of unresolved fears surrounding the incident.

Chase dreams can be an expression of the shadow archetype. While often maligned as the “dark side” of the psyche, it is a mistake to define and dismiss the Shadow as nothing more than the self’s dark half.

It is true that the shadow is composed of the psyche’s unwanted elements. But to quote Carl Jung, “In the shadow is the gold.” Jung’s comment underscores the truth that not all of the shadow’s undesired contents are actually authentically undesirable.

Abandoned talents, power, and gifts threatening to dismantle a mediocre life by restoring its vitality and passion can be the gold in the shadow. Those comfortable in comfortably numbed lives will often run from anything, no matter how promising or precious, that insures an end to a deadened existence.

Sometimes resistance to the reclamation of shadow gold is due to survival issues. The life one knows, even if negative, is the life that the dreamer knows she can survive.

Lack of confidence in one’s survival abilities within the confines of a life unknown, especially when drained from the known one, leads to the feeling that change equates to death. Dreams of being chased by stalkers in one’s own home are expressions of those shadow fears.

Whether or not the pursuer in a chase dream is known or unknown, correlating its symbolism to allows one to ascertain if the stalker is a fear symbol, or one whose relentless pursuit is rooted in desperation to resurrect the dreamer.

How To Easily Enter a Lucid Dream