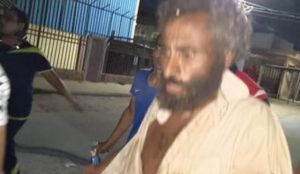 A resident of the Egyptian village of Kafr Al-Khosar in Sharhiyah governorate was found wandering through a cemetery four months after his own funeral, reports Arab News.

Teacher Muhammad el-Gammal, 40, suffered from mental illness and often left his home. Sometimes he disappeared for up to a month.

In January, El Gammal disappeared again. The family searched for him unsuccessfully until a relative working at a local hospital called them. He said that the body of the unknown person was taken to the hospital, and the relatives of the missing person went to identify.

All relatives identified El Gammal as deceased. A DNA sample was taken, but the family never received the test result. The funeral took place on March 21.

Last weekend, a group of young people discovered El Gammal wandering around the cemetery. The man was taken to the nearest police station.

How a person managed to get out of the buried coffin is still unknown.

The police hypothesize that the family confused the relative and buried another person. In the near future, government officials will be digging up the coffin to see if there is anyone there.

Earlier it was reported that a resident of the Chinese city of Chongqing returned home alive two months after his own cremation and burial. His family demanded compensation from the hospital for confusing the patient with another Chongqing resident.