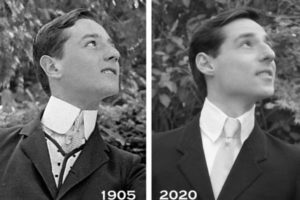 24-year-old artist Michael Koropish, who lives in England, in the small town of Stockport, feels “out of place” in this life. He likes the 19th century so much that he does not want to recognize absolutely any new achievements of modern science.

The Briton loves clothes from the Victorian era. He uses only a bicycle for movement. Michael tries not to use modern technology, but writes exclusively with pen and ink. In the artist’s house, you can see a huge amount of antiques and it is equipped in the style characteristic of the 19th century.

He soon began to suspect that in his past life he was living at that time, so he still has such an attachment. In the spring of this year, he found confirmation of this, which shocked the artist.

His friend sent Michael a photo he found on the Internet. It depicts a man who is an exact copy of the artist. But the photo was dated 1905.

Initially, Michael thought it was some kind of fake, but the photo turned out to be real. The man added that those who saw this picture called him a time traveler. Michael does not know anything about the person in the photo, but if you take into account his clothing style, then he was either from the USA or from the UK.

Michael was shaken, because he had never seen anything like it before, but gradually he got used to the idea that he had once lived. At least, this explains at least a little his strange behavior and love for antiquity.

Woman after a coma spoke with a New Zealand accent