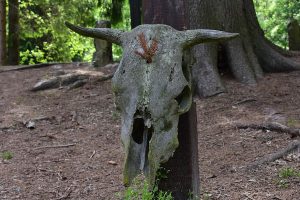 A Reddit user Knightofthemirrors posted a creepy story, accompanied by photos he took.

He did not specify where exactly this place is located, but apparently in the USA.

“I’m a wilderness survival instructor and security contractor. A couple days ago a student of mine and good friend who I had taken out into the woods before told me his dad just got 150 acres of land in a secluded, mountainous part of my state.

“It had a large amount of forest on it that hadn’t been explored yet as his dad was only building something for his horses that took up about a hundred yards of the property, and his horses were free to roam at the moment. He said his dad got an insane deal on the property.

“My friend is now a dad of three and I know he doesn’t get out into the woods that often, so I agreed to go with him because it seemed really fun and I can imagine he needs a getaway every now and then. We are both indigenous, into cars, into wilderness survival and all sorts of stuff so we never run out of anything to talk about in the woods.

“His dad however, told us that he didn’t want anybody exploring the woods unless we had a gun. He said it was because he saw coyotes. Now we’re all indigenous here, we were raised in the same state, coyotes don’t actually attack people really.

“My friend who we’ll call RC also told me a while back when he was first at the property he saw movement in the tree lines that was roughly human size and shape but couldn’t really tell since his eyesight isn’t that good. I brought my AR and a small Flint knapping kit just for the fun of it and we set off onto the property.

We explored a lot of the rolling fields, creeks, multiple natural springs and ponds. Everything felt normal, it was beautiful landscape. Eventually we decided to get to the forested part of the property as it hadn’t been explored yet. As soon as we entered the tree line the entire mood shifted.

“The forest had a ambiance of its own, very similar to the woods in the movie “the ritual”. The woods were grey, and dead silent save for the occasional creaking of tall, tired cedar trees. There was a very small stream running through the center of it with sand that was black.

“It felt like we were surrounded, watched from all sides. It didn’t take long before a very putrid stitch hit our nostrils. It was the odor of rotting flesh. We decided to follow the smell and found the remains of three to four cows (I have video).

“We examined the exposed skulls and couldn’t find any bullet holes, it didn’t appear to me that these cows had been put down. Something killed them though, and their bones were spread over about 30 yards. There were large indentions in the dirt all around them that were very vague in their shape.

“We decided to press on in the woods. Now we were accompanied only by silence, the putrid odor of death, and the sound of our own heartbeats. We kept stopping at the stream as I noticed several different types of tracks, large coyote tracks, and something else that was large but intentionally avoided the sand it seemed.

“We pressed on into the woods until we started to find trees that had been bent over and pinned behind other trees while they were still alive, something that could never, ever happen naturally (I have video).

We hiked on, and found what I can only describe as a tool made of bone lying on the ground. It was extremely crude, but looked like some kind of scooping tool or knife (extensively photographed).

“It was disturbing because although it looked primitive, it looked way more primitive than a person would make, but an intentionally shaped tool nonetheless. We hiked on until we found a clearing with a pond that had more large oval tracks surrounding it (I photographed them).

“On the other side of the pond we found a very strange little tree structure. It was in A frame, it had rocks placed up against it. However it wasn’t that sturdy, and the rocks were very peculiarly placed. We found no signs of any campfires around it. We found no camping trash.

“This isn’t exactly a place you could hike to from a house. I photographed, and made a video of the little Hut thing. It was getting dark so we decided we should head back, I had a flashlight on my AR but I didn’t want to rely on that, in the dark, with something that kills cows and makes tools out of their bones somewhere behind us.

“We made our way out of the forest and back to where the trucks were parked just in time before it got too dark to see. As we were leaving, we saw something on top of one of the hills that we couldn’t identify but didn’t stick around to find out what it was. It’s worth mentioning the previous owner began construction of something on the property, abruptly halted construction, and left.”