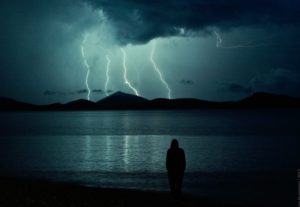 The Australian is incredibly lucky that he survived after he was struck by lightning. The consequences of a lightning strike persist to this day. He claims that he can now predict when a thunderstorm is coming, reports headtopics.com.

The man claims that after being struck by lightning, he gained a unique power.

In November 2015, 31-year-old Kristoffer Green was heading to the hospital with his daughter, who had been stung by a wasp. Then he noticed that clouds were approaching and said that you need to be more careful.

It was at that moment that lightning struck the umbrella handle and passed through the man’s body.

According to Green, he was helping his wife to seat his daughter in the back seat of the car, and held an umbrella in his hands.

“The umbrella has a wooden handle, but the tip of my right index finger touched the metal part. It was like a blinding light and then I passed out. My wife said I just fainted.”

The Australian was rushed to the hospital, where he was hooked up to a monitor. The apparatus showed that his heart was beating at a speed of “a million miles per hour.”

“When I woke up in the medical center, my wife was crying over me, and I was just in shock. I had no idea where I was or what happened,” he added.

The man was treated at the hospital and sent home the next day.

Despite his recovery, the physical and psychological effects of the blow persisted for a long time. There was a tingling sensation in the right arm, struck by lightning, for several days.

Now the Australian, who used to love thunderstorms, has dramatically changed his attitude towards this natural phenomenon.

“If a thunderstorm comes, I get stressed and my heart starts racing,” he said.

Even though the tingling in his arm has stopped, Greene says it only comes back in one case.

“For several years after being hit, my right arm started to hurt even before the storm hit,” he said. “I sometimes tell my wife that ‘thunderstorm is coming’ and after a few hours it really starts.”

By 2100, the Earth will become so hot that it will be dangerous to be outside