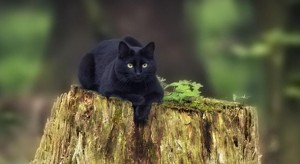 One of the most common questions asked between newly dating couples is if the other person is a “cat person” or a “dog person.” This seemingly mundane inquiry is supposed to provide adequate assessment for the nature of the individual since he or she tends to like the animal which resembles his or her habits the most.

Many like to think of “cat people” as those in the minority since dogs tend to be thought of as man’s best friend in Western society, but cats actually have a regal and long standing tie to humanity all on their own. Even though dogs tend to be steady in their role as side by side companions of mankind, cats have been through a roller coaster of ups and downs with some cultures idolizing them as gods or the height of the presence of the mystical and magical on the earthly plane to being very negative omens or animal embodiment of demons and evil spirits.

The fact that cats are still around and still part of many individualized belief systems and folklore shows that they are truly strong animals that can outlast any negative press and a history of being hated only to rise above all that to remain special in the hearts of humans. The magic of cats spans the ages though, and these mystical felines have been the foundation of several different branches of the supernatural realm over the eons.

One of the most famous cases of cats being seen as extremely special supernatural beings is of course ancient Egypt. While they were not exactly worshiped as is the common misconception, they were still kept in very high esteem as they kept rodents away and were skilled natural hunters.

The Egyptian goddess of protection and fertility known as Bastet (or merely Bast) was often seen in the mythology as a cat or enjoyed the ability to take on the form of a cat. This religious link meant that most Egyptians paid great respect to domestic cats in case the feline happened to be the goddess in her primordial form.

The tie between Bastet and cats allowed pet cats to enjoy liberties not given to other household pets such as the freedom to come and go as they pleased rather than being caged or leashed. Having a loyal household cat was also thought to be lucky as it would act as a protective spirit over the house and the house’s inhabitants with its natural magic and connection to such a powerful goddess in the Egyptian pantheon.

Even though most people tend to restrict their views of the ancient Norse culture to manly Vikings and the raven carrying god Odin, there was a more feminine aspect to this ancient civilization and religion that embraced cats as special creatures.

The Norse goddess of fertility and love named Freya (also spelled Freja, Freyja, Freija, or Freiya), which literally translates as “Lady” and is the source for the day of the week known being called Friday, was closely associated with cats in addition to her prowess over the magical realm.

Her personal transport of a beautiful chariot was pulled by two large gray (or in some stories black) cats and domesticated cats were thought to be her liaisons to the mortal realm, signifying good luck and a happy home life to those who kept cats in their home by taking care of them and feeding them. These cats were also given a certain amount of freedom as the cats were supposed to be helpers of Freya whenever she called upon them or needed assistance.

The sacred Burmese cat is one of the most special cats to that part of south east Asia, having a story for its own origins of the specific breed that involved the cat being tender and caring toward a murdered monk. It is believed that the holy Kittah (monks of the ancient religion in the area) was blessed by the goddess Tsun Kyan-Kse to be reincarnated in the form of these special felines upon their deaths.

They will then live out one life as a cat before immediately ascending to Nirvana where they will rest comfortably with a shimmering, golden halo to denote their unique status in this paradise beyond the mortal human realm. Anyone who kills one of these beautiful cats with brown extremities, white paws, golden fur upon its center body, and blue eyes (even if the death of the animal was an accident) was to be condemned to suffer incredibly cruel torments until the injured soul of the reincarnated monk was appeased.

The Siamese cat is one of the most popular breeds of feline even in today’s world because of its unique beauty. Similar to the mythology surrounding the Burmese cats, the special Siamese cats were also thought to house the souls of those who had already passed on—particularly the recently deceased king of Siam. In order to be present at the coronation of the new king, the previous king that just died would be reincarnated as a Siamese cat before moving on in attainment of heaven.

Since the feline body housed the spirit of the previous monarch, these special cats were treated like members of the royal family just as the king would have been if his spirit was in his natural human form which included residence in the royal palace with a very luxurious lifestyle for a cat until its time had come to die of old age when it would be buried with a great deal of pomp so that the spirit of the dead king would finally move on to heaven.

The era of medieval Europe was a very negative time for cats and cat lovers. Pope Gregory IX actually denounced black cats as being agents of the devil and Satanic in origin. This led to a mass extermination of many cats, some of them even burned alive in search of the devil’s spirit within.

Subsequently, cats were also associated with witches during this time as they were thought to be gifts from the Devil to help in their witchcraft acting as “familiars” once the witch sealed her (or even his) pact with Satan. In fact, one of the implicating signs of someone who practiced witchcraft during the Middle Ages was a person who talked to and more than casually interacted with a beloved pet cat that one had named. Of course there was a relatively big problem in the killing of cats during this very anti-feline period.

Less cats on the streets meant the increased proliferation of rats and thereby the fleas on the rats who were carrying the virus known as the Black Plague. If this era does anything it speaks of the fact that while cats may be linked with ancient pagan ways and early polytheistic religions which Christianity hated and wished to fight against, these animals were still special in their own right and deserved to be treated lovingly and with respect. Some historians still hypothesize that the extent of the Black Plague would have been greatly lessened if the European Christians had simply let the cats continue their role as silent protectors of mankind.