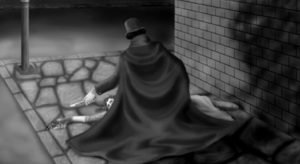 Mary Eleanor Wheeler, born in 1866 in London, was the daughter of a man named Thomas Wheeler. It is not known for sure if this is the same man who, on November 29th, 1880, was executed for the murder of Edward Anstee.

He may well be Mary’s father, but there is no evidence to support it as a fact. At an early age Mary, who lived with her mother and older sister, began to develop a serious problem with depression and later on, was known to be a heavy drinker, what today would be called a binge drinker.

Even though battling her personal demons Mary tried as best she could to carry on, becoming a midwife and abortionist in London’s east end slums.

Mary Wheeler changed her name to Mary Pearcey after she met and moved in with a man named John Charles Pearcey. The two were never married and the arrangement did not last for long. John Pearcey left the relationship due to Mary’s many infidelities with men she would meet at various pubs in the Whitechapel area.

Following the break up with Mr. Pearcey, Mary moved in with a man named Frank Hogg and his girlfriend Phoebe Styles. Mary, who was said to have had “strong lesbian tendencies,” seemed to have been best of friends with Phoebe.

Not long after Mary moved in Frank and Phoebe learned that Phoebe was pregnant and at Mary’s insistence, were married. Mary not only continued to live in the house, but being a midwife, delivered the Hogg’s child, a daughter also named Phoebe. At some point Mary did move out although she and Phoebe appeared to remain good friends.

On October 24, 1890, at the invitation of Mary, Phoebe and her daughter arrived at Mary’s home. Nothing appeared to be unusual until about 4:00 pm when neighbors reported hearing terrifying screams coming from Mary’s house.

The body of Phoebe Hogg was found later that evening at a trash dump in Hampstead, her skull had been crushed and she was nearly decapitated. A blood soaked baby buggy was found about one mile away and the body of 18 month old Phoebe was later discovered in Finchley.

Police searched Mary’s home and found blood splattered walls, ceilings and blood soaked floors. Mary Pearcey was charged with the double murder, convicted and sentenced to death. She was hanged on December 23rd, 1890.

Since her death the ghost of Mary Pearcey has been reported many times in Whitechapel. She is said to roam the same streets that she did in life, often pushing a bloody black baby buggy which, on occasion, she pushes into oncoming traffic before disappearing.

She has also been seen walking past her favorite pubs wearing a bloody dress, just as she had been seen so many times during her life after performing her role as a midwife and abortionist.

Normally, that would be the end of the story, but, if true, the rest of the story of Mary Pearcey, sometimes called “the Mad Midwife,” is very disturbing. No doubt the double murder shocked and fascinated the public, but there was a much bigger story in London at the time.

An extremely violent serial killer with the self-given name of “Jack the Ripper,” was killing prostitutes and terrifying the Whitechapel area.

The last victim of Jack the Ripper was Whitechapel prostitute Mary Kelly. Kelly’s grotesquely butchered corpse was discovered in her room at 13 Millers Court on Friday November 9, 1888. Police estimated that she had been murdered at between 3:30 and 4:00 am and that was a problem.

Inspectors on the case interviewed a woman named Caroline Maxwell who claimed that she saw Mary Kelly on two occasions after the supposed time of her death. Maxwell first saw Kelly at about 8:00 am at Millers Court and said that Kelly appeared to be ill.

About one hour later Maxwell saw Kelly again, this time in front of the Britannia Public House. Maxwell’s observation was based on the clothing that the woman she identified as Mary Kelly was wearing. specifically, a shawl that Kelly always wore.

While investigating the Kelly crime scene police had noted that there was women’s clothing burnt in the fireplace. While pondering what, if anything, the burnt clothing meant, Inspector Frederick Abberline came up with a disturbing question, was Jack the Ripper, or at least Mary Kelly’s murderer, a woman?

If Mary Kelly’s killer was indeed a woman, she could have changed into some of Kelly’s clothing and disposed of her own bloody clothing in the fireplace.

Inspector Abberline never had a woman as a suspect in any of the ripper killings but maybe he should have. Mary Kelly was several months pregnant at the time of her murder. Being a prostitute and living in terrible poverty, Kelly most likely would have wanted to abort the baby.

If that was the case, Mary Pearcey, midwife and abortionist, was the one to call in Whitechapel. Pearcey demonstrated the homicidal rage that would be required to slaughter a human being in the manner that Mary Kelly was in the two murders that she was executed for.

There’s no way to know for sure if Mary Pearcey was actually Mary Kelly’s killer. It is interesting to note however, that the clothing Mary Kelly wore the day she died was found folded neatly beside her bed, except for the shawl that Caroline Maxwell reported seeing a woman wearing after Kelly’s death.

In 2006 DNA from the ripper case was examined. The results were inconclusive, but the possibility that Jack the Ripper was a woman could not be ruled out. Between 1888 and 2012 London Police have investigated 30 cases where the murder victim was butchered in the same manner as was Mary Kelly. 29 of those cases have been solved and in all 29 cases the killer was a woman.