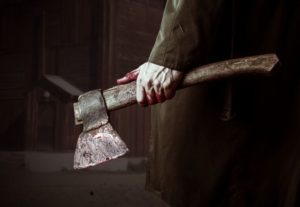 The gully known as Kingsbury Run looks like a scar across the face of Downtown Cleveland. 60 feet deep in places, the ancient creek bed is lined with 30 odd pairs of railroad tracks serving local factories and distant cities, bearing cargo to Pittsburgh and Chicago among others.

During the great depression, Kingsbury Run was also a favorite place for hoboes and a playground for children with time to kill. In the late 30’s it became the focal point of one of America’s most fascinating murder mystery, a case still unsolved today.

On September 5, 1934, a driftwood hunter found the lower portion of a woman’s torso buried in sand at Euclid Beach, 8 miles east of Downtown Cleveland. The victim’s legs were severed at the knees, her skin discolored by application of a chemical preservative. The victim’s height and age resembled none of Cleveland’s known missing women. “The Lady of the lake” was never identified.

A year later, on September 23, 1935, boys playing in Kingsbury Run found two headless male corpses. Both had been emasculated, and their severed heads were found nearby. Authorities determined that the older victim, never identified, was killed at least 5 days before the other, and his skin bore a reddish tinge from a treatment with chemical preservative.

The younger man, identified as 29 years old Edward Andrassy, was a bisexual ex-convict. Retraction of the neck muscles on both corpses indicated that the men were alive when their heads were severed.

On January 26, 1936, a butcher found two human thights, one arm, and the lower half of a woman’s torso behind his shop. The upper torso, lower legs and missing arm were found 12 days later behind a vacant house. The victim was identified as Florence Polillo, a 41 years old prostitute. Her severed head was never found. 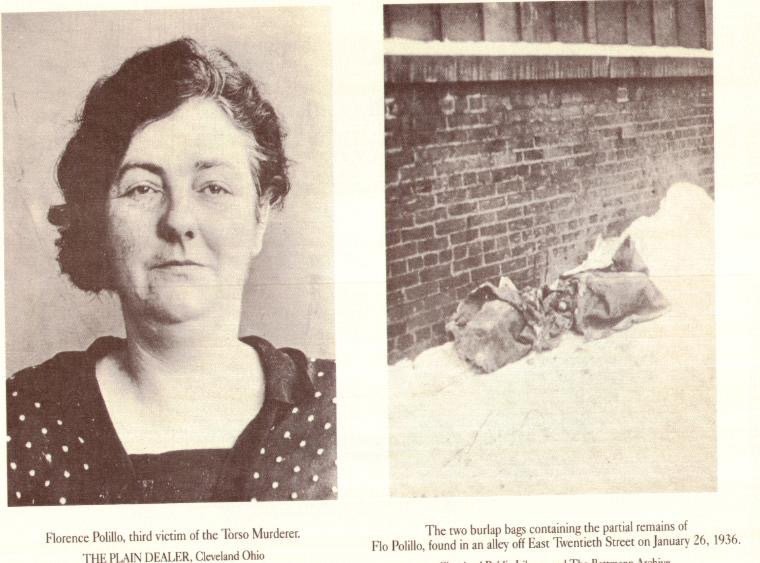 On June 5, 1936, two boys traversing Kingsbury Run found a man’s head wrapped in dirty trousers, a mile from the spot where Andrassy and his companion were found in September 1935. The victim’s body was found one day later, on June 6, but the victim’s identity remained unknown, despite publication of his numerous tattoos and a plaster “death mask” displayed for all comers at the 1936 World’s Fair in Cleveland.

A Hobo spotted victim number 7 in Kingsbury Run, on September 10, 1936. The dismembered remains were floating in a pond, and police divers were called to retrieve two halves of a torso, plus the lower legs and thighs. The head, arms and genitalia were never found.

On February 23, 1937, the upper half of a woman’s torso was found at Euclid Beach, almost precisely where the first victim had been found in September 1934. Then on June 6, 1937, the skeleton of a black woman was found beneath a bridge near Kingsbury Run. Again the victim was decapitated.

Exactly one month later, the lower torso of a man was found underneath the Third Street Bridge. By July 14, 1937, authorities had everything except the latest victim’s head and name.

On April 8, 1938, a woman’s lower left leg was fished out of the Cuyahoga River. Later authorities found other parts of the body but the victim’s head, arms and right leg were never found. Her identity remains unknown. The last “official victims” were found on August 16, 1938, by workmen at a Lakeside dump.

One victim was male, the other female. The male was nothing but a skeleton, decapitated, missing both hands and feet. The female victim was cut in 9 pieces. Both victims were killed at different times. However in 1940 three corpses were found in abandoned box cars near Pittsburgh. All had been decapitated and the heads were missing.

The men had been dead from three to six months, Authorities unanimously blamed the crimes on Cleveland’s killer, tracing the box cars to pinpoint the murders in Youngstown, Ohio, in 1939. However a lot of people think that this was the work of another killer, maybe a copycat.

All three bodies had been scorched with fire, not a trademark of Cleveland’s killer. Also one of the body had the word “Nazi” carved on the chest, again not a signature of the Mad Butcher.

The newspapers variously dubbed the killer “The Mad Butcher of Kingsbury Run”, “The Phantom Killer”, “The Torso Slayer”, “The Torso Murderer”, “The HeadHunter” or simply “The Unknown”.

Various investigators, including Peter Merylo and Martin Zalewski, were assigned full-time to the case but trying to find evidences in these murders was almost impossible, the killer leaving no clues behind him.

In January 1939, the Cleveland Press received a letter from a man claiming to be the killer. In this letter the man, calling himself “X”, said he was now in California, that he was killing for medical experiments and that the victims found in Kingsbury Run had been “laboratory guinea pigs”.

The letter seemed to be legit but we can’t be sure that this was indeed from the killer since he gave no details of any of the murders. Then on July 5, 1939, Sheriff’s deputies arrested a Slavic Immigrant, 52 years old Frank Dolezal, and launched a marathon interrogation in the county jail.

Dolezal eventually confessed to the murders of Andrassy and Polillo, but later recanted all confessions, charging detectives with third-degree tactics. On August 24, 1939, Dolezal “committed suicide” by hanging himself.

He had four ribs broken and his body showed sign of numerous beatings. Today no one regards Dolezal as a serious suspect in the case.

In his book “4 against the Mob” (1961) Journalist Oscar Fraley claims that Cleveland public safety director Eliot Ness, famous for his rivalry with Al Capone, identified the Torso Murderer in 1938.

Ness’ suspect was described as a gay premed student and member of a prominent Cleveland family. Interrogated by Ness in 1938, the suspect allegedly escaped prosecution by committing himself to a mental institution, where he supposedly died in 1940 or 1941, Before his death he allegedly tormented Ness with a series of menacing notes.

If Ness was certain of the killer’s identity then why did he allow suspect Frank Dolezal to be tortured (and likely murdered) by the Sheriff’s deputies in 1939!?

Today a lot of people have doubts about Fraley’s story, including professor James Badal, who wrote a book about it in 2001 (In the Wake of the Butcher). Ness was obsessed with the case and in his mind, in his mind only, the case was closed. In reality the case was not, and still is, Unsolved.

There’s a grisly postscript to the Butcher’s story. On July 22, 1950, a man’s headless body, dismembered, was found in a Cleveland Lumber yard, a few miles from Kingsbury Run.

The severed head turned up 4 days later and the victim was identified as 40 years old Robert Robertson. The coroner in charge of the case reported that “the work resembles exactly that of the Torso murderer”.

In retrospect it seems clear that the Mad Butcher killed at least 13, perhaps 16, victims between 1934 and 1939. He may have killed Robert Robertson as well, and speculation links the same killer to a series of “Headless murders” around New Castle Pennsylvania, between 1925 and 1939.

No firm connection was established in that case, and the mysterious case of The Mad Butcher of Kingsbury Run remains Unsolved.

Sources: The Encyclopedia of Unsolved Crimes, by Michael Newton