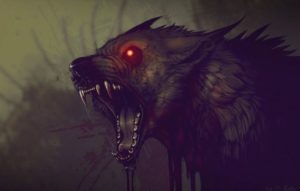 Costea lived in a Romulus, Mich., farmhouse with his mother, his uncle, and his mother’s boyfriend. They raised chickens and rabbits, with farm cats roaming the crumbling old barn on the small acreage. But it was the woods that separated the house from a nearby major road, woods that kept the house and the family hidden, that marred Costea’s childhood.

“We had this really strange dog creature that would hang around the property,” Costea said. “I say dog creature because this thing was far too big and intelligent to be a stray dog.”

The dog, as big as a Great Dane, seemed to have the upper part of a German Shepard and the lower part a Doberman pinscher. However, its eyes are what haunt Costea.

“It had very pronounced red eyes,” Costea said. “I’m not saying it was a werewolf or a dog-man but it was very werewolf-like.”

Everyone who lived in the house saw the beast.

“The dog would frequently stalk the edge of the woods on our property in the day,” Costea said. “It seemed to have no fear. My uncle would yell at it or throw things towards it to try to scare it off but it would simply rear up on its hind legs like a ram and charge at (him) for a short distance.”

The dog never reached Costea’s uncle, or anyone else who lived in the house. However, it did reach other things on the farm.

“We would frequently find dead chickens or rabbits after thunderstorms,” he said. “We knew it was that dog thing because it would leave huge paw prints in the mud and claw marks on the window ledges.”

The thing eventually turned its attention to the house.

“Sometimes we would find the screens ripped from our screen doors and windows,” Costea said. “It would never outright attack us, but it did seem to enjoy taunting us and harassing us.”

The taunting quickly became dangerous when the “dog” spoke.

“One summer night my mom had left the window open in my bedroom to cool the room off so I could sleep,” Costea said. “She was on her way to the bathroom and went by my room and heard me talking to someone.”

Stopping by her son’s door, well after his bedtime, she thought he was playing. She opened the bedroom door, turned on the lights, and saw the dog.

“When she opened the door she saw me standing in my bed and I had apparently wet my pajamas,” he said. “I was talking towards the window. I wasn’t screaming or freaking out but seemed to be transfixed and talking in a low voice towards the window.”

Costea didn’t notice his mother, nor did he notice the tungsten light that suddenly poured a yellow glow through the bedroom. His focus was on what was at the window.

“When she looked towards the window the dog had its two front paws pushed through the screen and was looking through the window at us and making a low growl,” Costea said. “Its eyes glared red.”

Costea’s mother threw the beer bottle she carried into the beast’s face. Startled, it backed out of the window. She slammed the window shut and closed the blinds.

The dog-thing’s presence, however, was not gone.

“My mom told me that for about a week or so after that I acted very strange,” he said. “Like the way the kid acted in the movie, ‘The Shining’. I would say things like, ‘we don’t want you here,’ ‘our ghosts are food,’ or ‘God thinks you’re bad.’”

The housecats would run, terrified, when Costea entered the room for that time of madness. That wasn’t the only thing wrong.

“For some reason I would take sewing needles or anything sharp I could find and prick my fingers till they would bleed then finger paint all over the walls with the blood,” he said. “The house also had a very strong septic tank smell to it for a few days. Lights would burn out and pop and weird things would just happen.”

Two weeks after the dog tried to coax Costea out of his room it all stopped.

“My uncle was out back working on his truck when he saw the dog at the edge of the woods making its way in towards the rabbit pen,” Costea said. “At this point he was tired of dealing with it and went into the house to get his .22. Apparently he fired at it and hit it in the rear. The dog turned and ran into the woods. We didn’t see it anymore after that and everything cleared up.”

But the dog-thing will be with him forever.

“I always recall its eyes,” Costea, now 40, said. “You could see its eyes out in the woods sometimes at night. I have bad dreams about it from time to time.”