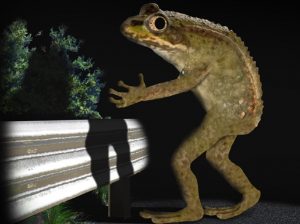 Was something paranormal lurking around Loveland, Ohio in the 1970s? And if so, is it still there? The so-called “Loveland creature” case was first investigated thoroughly by OUFOIL (Ohio UFO Investigators League).

OUFOIL spent time with the two primary witnesses, both police officers, who saw this strange looking creature. The events of the 1972 sightings continue to baffle paranormal researchers.

According to various legends, the creature was first sighted in 1955, with some versions of the story specifying the month of May. There are three different versions of that story that only differ slightly from each other.

The three stories start the same way, with a businessman or a traveling salesman driving along an unnamed road late at night. The stories start to diverge at this point: in one story, the driver was heading out of the Branch Hill neighborhood when he spotted three figures stood erect on their hind legs along the side of the road, each 3 to 4 feet (0.91 to 1.22 m) in height, with leathery skin and frog faces.

In the other two versions of the story, the creatures were spotted under or over a poorly lit bridge (there are a number of bridges in Loveland going over the Little Miami river).

The story tells of the businessman watching the figures converse for a while until one of the creatures held a wand over its head and fired a spray of sparks, startling the observer into fleeing the scene.

On a cold night in March 1972, Loveland police officer Ray Shockey was driving on Riverside Road at 1:00 AM towards Loveland. On the icy road, he saw what looked like a dog. He slowed his car to avoid hitting it, but as he passed by, it stood up, and as the headlights fell upon the body, he knew this was no dog!

The creature was about 4 feet tall, weighing around 60 pounds, and was covered in leathery, reptilian skin with a lizard-like face. It looked at him briefly, and then leapt over the guard rail onto the embankment by the river.

Little did that officer know, back in 1955, along the same river, a man driving at 3 a.m. came across a group of three reptilian creatures, which had been described as having wrinkles on their heads and frog-like faces.

A few weeks later, on the same road, another police officer had another paranormal experience. While driving out of Loveland, he saw something lying in the road.

Assuming this was an animal carcass, he pulled his vehicle over, intending to move the carcass until the game warden could pick it up. As he opened his car door, it made a sound which startled the “carcass”.

It rose to a defensive crouching position. Its eyes glowed in the headlights as it shambled over to the guard rail. The creature raised its leg to climb over the railing, and the officer shot at it. He missed. The second officer also did not file any official report.

Area residents have recalled hearing stories about unknown creatures in the area for years, but were unable to give details or further the investigation. A farmer claimed to have seen a similar reptilian creature during the same time period, but again, no answers were found.

So what was this unknown creature, seen by two police officers back in 1972? And has anyone seen it since? Investigations have lead nowhere, and it still remains a mystery.

The Loveland Frog will continue to be a legend, a mystery found in the pages of paranormal investigations and cryptozoology. At least, until it is seen again.