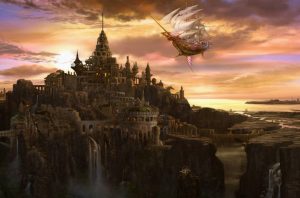 Lemurians are said to have once existed on a lost continent in the Pacific Ocean. Did this mysterious ancient civilization really exist?

The Atlantic Ocean is said to be home to the lost continent of Atlantis while the Pacific Ocean allegedly once contained a continent known as Lemuria or Mu for short. Who were these people and what happened to the continent?

The Continent of Lemuria

Lemuria was supposedly a large continent which existed around the same time of Atlantis. English zoologist Phillip Sclater hypothesized that “A land bridge once existed during the Eocene Age from Malay Archipelago to the south coast of Asia and Madagascar, thus connecting India to southern Africa.”

According to Sclater’s theory, it would explain why lemurs, (whom Lemuria is named for,) are found on both Africa and India.

It is said that Lemuria flourished until about 12,000 years ago when it was destroyed by natural disasters including a volcanic eruption, tidal waves and earthquakes. What is left of this so-called lost continent are rocky islands scattered about the Pacific Ocean.

Various descriptions of Lemurians have been suggested by theosophists and philosophers. Some of these include that Lemurians were fifteen feet tall, had four arms, and originally laid eggs.

An easier claim to swallow is that they were a shorter race of people with somewhat dark complexions. They are believed to have lived simply and were very spiritual. They also possessed the ability of clairvoyance.

Several scholars paint a vivid picture of this land, from knowledge gained through purported ancient documents. The most noted of these was the great 19th century esoterisist, H.P. Blavatsky, who described ‘Lemuria’ in her vast history of humanity.

Blavatsky claims the content of her text ‘The Secret Doctrine’ was largely based on the book of Dzyan, which was passed on to her by the ‘Brotherhood of Mahatmas’ (masters), who allegedly run the world from their headquarters in Tibet. Blavatsky said the book had been composed in Atlantis on palm leaf pages in the forgotten language of Senzar.

Its contents mention the ‘third race’, named the Lemurians, while the fourth was Atlantis and the fifth is supposedly our own. The sixth race, Blavatsky reveals, will evolve from us and return to the lost land of Lemuria.

Blavatsky describes Lemurians as having four arms, with some having an eye on the back of their head that gave them psychic vision. She adds the Lemurians lived in caves and holes and had no spoken language, communicating only through telepathy.

They also had no proper brain, but could literally move mountains by their will power. Blavatsky believed Lemuria existed in the Southern Hemisphere 60 to 40 million years ago.

After Blavatsky’s death in 1891, a leading theosophist name W. Scott-Elliot wrote a lengthy paper titled ‘The Story of Atlantis and Lost Lemuria’.

Elliot claims the content derived from the “Theosophical Masters”, who describe Lemurians as between 12 and 15 feet tall, with flat faces, no foreheads, brown skin, and eyes so far apart they could see sideways as well as forwards. They also had an eye in the back of their heads, which proved useful for walking backwards, as their heels protruded immensely.

Elliot says Lemurians continually evolved over time, and today’s Australian Aborigines, Andaman Islanders of India and Lapps are all descendants of this final race. He then quotes the Theosophical Masters, saying that approximately 800,000 years ago, Lemuria sank and made way for Atlantis, before it too perished in 9,654 BC.

However, there is some evidence to suggest Blavatsky, Elliot and others in the Theosophical Society were given misleading information by the ancient Bon cult of Tibet. Little known outside of India, Nepal and Tibet, the ancient Bon Religion embraced principles such as personal power, deception, control over others, telepathy and black magic.

One of the more credible claims about the Lemurians comes from Colonel James Churchward who allegedly was shown some secret ancient stone tablets by a Hindu priest.

According to these ancient stones, Lemuria consisted of 60 million people who lived in ten different tribes. The continent itself was 6,000 miles long and 3,000 miles wide.

Just as some Atlanteans are believed to have escaped their continent as it was being destroyed, thus was the fate of some Lemurians. According to Churchward, evidence of the existence of Lemuria can be found in the artifacts and legends of the ancient Egyptians, Greeks, and Tibetans, to name but a few.

Unfortunately, there doesn’t seem to be any concrete proof that Lemuria existed. Although there are those who claim to have past life memories of living there and many people have seen this mysterious continent via psychic abilities, there is no scientific proof that it existed.

Like it’s famous counterpart Atlantis, Lemuria remains a mystery. For now it must remain a legend until proof is found that it actually existed. Just like it’s been said that one day Atlantis will rise again, the same has been said for Lemuria. Only time will tell.

25 Common Superstitions and their Origins

Scientific Approach to Ouija Boards: How and Why Do They Work?