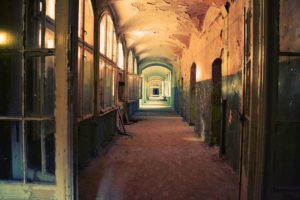 In the town of Coventry, Rhode Island sits an abandoned building on Washington Street. This building has been empty for decades but it is still rented out occasionally.

In recent years, Thomas D’Agontino’s band rented the building to use as a makeshift recording studio. Afterwards, they regretted their decision.

The band knew the building’s history included it being used for Gorton’s Funeral Home for several years but they were not concerned. They did expect they might encounter something but what they experienced shocked them.

At first they noticed loud banging sounds, this was disturbing enough on its own but before long they began to see things that frightened them.

Every band member witnessed multiple apparitions. One of these ghosts was a tall man wearing old-fashioned baggy clothing. They saw this ghost walk right through walls.

Another ghost they saw frequently was a small man that wore glasses. They identified this man from a portrait that was left in the building. He was a former undertaker.

This ghost would close the double doors to a room they used for rehearsals and as their recording studio. They realized this room was used at one time as an embalming room.

Once this small man ushered them in he would just vanish into thin air.

D’Agostina states that the creepiest activity they encountered was a woman’s mournful cries. As the band entered the studio one day they heard the doors boom shut behind them. Then as they recorded a song they heard these same noises again.

Curious to see if they picked up these booms on their recording they played it back. Sure enough they heard the booms but then they also heard a woman moans. She then began to scream and shriek.

D’Agaostina admits these sounds sent shivers up his spine.

One night as three of the band members where in the basement they heard a female’s screams again. They appeared to be coming from the top floor. These screams were so loud they could hear them throughout the building.

They went up to the 3rd floor to investigate. As they switched on the lights to the large room on this floor the noises immediately stopped.