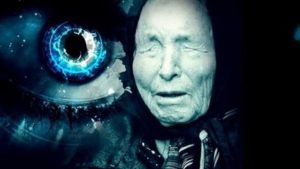 Baba Vanga, who is sometimes referred to as “Nostradamus from the Balkans,” had made a number predictions for the future till the 51st century, which, as she said, would be the last century for mankind.

Vanga (Vangelia) Pandeva was born on January 31, 1911. She died on August 11, 1996. She lived in the city of Petrich, Bulgaria and was buried in a churchyard of the Saint Petca Bulgarian Church in the Rupite region.

Vanga lost her sight when she was 12. She was swept away by a mighty tornado. Later she was found alive, covered with dirt and stones, with sand in her eyes. She became blind as a result.

Vanga started making predictions when she was 16. She helped her father find a sheep stolen from the flock. She provided a detailed description of a yard where the animal was being hidden by the thieves. Her powers of foreseeing took shape after she turned 30.

Many a statesman visited Vanga. Adolf Hitler called on her one day. He left her house looking rather upset.

The people, who were close to Vanga, can still tell a lot of interesting stories about the legendary mystic. Vanga’s niece, Krasimira Stoyanova said that Vanga could contact the dead.

The prophetess herself said once that she could sense their presence by the burning of the tip of her tongue. Then a kind of a cloud would envelop her brain. While Vanga was contacting the dead she seemed to be absent from this world.

Vanga would mentally ask questions to the souls of the dead, and they would answer. If the spirits had no answers, she heard some remote voice that came to the aid. The voice sounded as if she was speaking to someone on the phone. The stranger spoke either very loudly or so softly, that she had to repeat her questions.

As for contacting extraterrestrial civilizations, Krasimira said that she had preserved a list of questions, which Vanga answered concerning the aliens. Below are a few excerpts from it:

“Will humans contact with brothers in mind from other civilizations?”

“Is it true that alien spaceships visit Earth?”

“Where do they come from?”

“They come from the planet, which in their language is called Vamfim. They say that they prepare a great event but do not give any details of it.”

About one year prior to her death rumors about the arrival of extraterrestrial beings began to ooze. A number of Bulgarian newspapers even revealed the date, when it was going to happen, although it did not.

Several weeks later Vanga invited her good friend, a journalist, Boyka Tsvetkova. Below are some of the notes from her writing pad.

Vanga: “Do you remember the clamor about the aliens?”

Journalist Boyka: “I remember but they did not arrive.”

Vanga: “They arrived, but last night, I noticed them standing at my door, beautiful, well-shaped.”

Journalist Boyka: “Were you frightened?”

Vanga: “Why would I? We had a nice conversation and off they went.

Journalist Boyka: “Did anyone else saw them?”

Vanga: “Who else could see them if they visited me?”

Unfortunately, Boyka did not ask, what the aliens had come for. She moved on to another topic and did not give a word to Vanga. Prophetess never told more than she was asked.

In 1994 she predicted: “A day will come and cancer will be chained in iron! A cure, which shall cure people from this illness, must contain the iron, because this element is decreasing in the human organism.”

She also considered that “In the future, a drug (as in cure) will be discovered, which is very needed for the recovery of human health. It will be made from the hormones of horses, dogs and turtles. The horse is strong, the dog is resistant, and the turtle lives long,” she said.

“The time of miracles will come and science will make major discoveries in the field of the non-material. Until 2030 we will witness the amazing archaeological discoveries that will radically change our knowledge about the world.”

Exeter UFO Sighting: It Had Blue and Red Lights and Moved Strangely