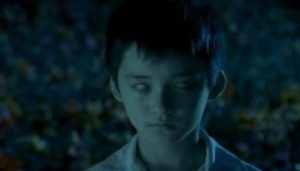 In December 1994 I had moved into a big farmhouse with my mom and her fiancee and his two boys. About a month after we had moved in and settled down I had started to notice little things that I didn’t think much of until they started to happen way too often.

Around the end of January I had begun to notice that a had missed placed so many things like brushes, CD’s, books, etc. I was only 15 at the time so I knew that my memory hadn’t failed me and I also knew that I wasn’t going crazy too.

I would find my things under my bed and behind furniture. Of course my little step-brothers would take little figures I had and play with them but they weren’t taking my CD’s and books b/c they had no interest in them. They were 5 and 3 at the time.

A couple of months passed, the same things always going missing but them knew things were starting to happen! Things that would make me lay awake at night b/c I was always trying to find a logical explanation. The first big thing that scared me half to death was that one day I was taking a shower in my bathroom with the door locked.

Everyone else had went shopping so it was just me in this big farm house. I was singing the shower and a was facing the shower when my shaver went flying and hit me in the back of the head! I completely freaked. I wouldn’t take a shower in there anymore. The next week I was babysitting my little brothers. It was about 10:00 pm, the t.v. was off, no stereos playing, the kids were asleep, the cat was outside and I was getting my pj’s on.

I went downstairs to get a drink from the kitchen. I could hear laughing coming from the living room. I walked in there and of course nobody was there. Then I went and checked on the kids, both of them were snug in their beds.

I thought of how strange it was but I wasn’t scared at all b/c I started to think it was my imagination. I had to look around the house one more time. Again, I was in the living room checking the stereo and that’s when I heard the eeriest laugh I’ve ever heard, way worse than the ones you hear in ever the scariest horror movie.

Little kids laughing, sounding so close but so far away. I told my parents about it as soon as they got home, my stepdad said that it was probably just people walking by. Well, that just didn’t jive with me b/c we live way out in the country, the closest house to us is 1 mile away and it was too late to be taking a nice stroll. When I told them, I thought that there might be another tenant in the house they just laughed and said I had been watching too many horror movies.

Of course, more things started to happen that were getting harder to explain. I had gotten a music box from a friend of mine, but I hate the music that they play so I had busted the music part. I took pieces out of it and everything.

I was going to bed, I walked into my room and looked on my dresser and there was the stupid music box, lid up and all, playing the music!! I screamed for my stepdad to get up there and he said that I was just playing tricks on everyone.

I was completely outraged with my parents for not believing me about any of this. More things happened like footsteps and t.v. and stereos going on all by themselves. Things were completely cleared off of shelves. It was just crazy!

This went on for 3 years before I found out what was happening. I and a couple of my girlfriends got together and played Ouigi. I didn’t know these girls well enough to tell them all about my life (my middle name, birthday, the exact time I was born, where I was born). We started fooling around with the game which didn’t believe in at all.

It had answered all of those things that are listed above. I was crying b/c I knew they couldn’t have known all about that. So I asked one of the girls who lived on the same road as me if she knew anything about the house. I had told them after the game all of the things that were happening. The girl who lived on the street just about fainted with fright. She told me about tenants that her mom used to be friends with.

She told me about the family and how they had had a little boy how had died at the age of 5. I thought she was just making it up so I went to the library and got some old newspaper clippings about it. All of them told the same story except they hadn’t said the cause of death and to this day I still haven’t gotten it figured out.

Anyways, after I found out all of this, I was still scared of the noises I kept hearing but I had a little piece of mind. I told my parents about what had happened but they still didn’t believe me until a couple of months ago when my mom started to hear things coming from my room when I was sleeping. She would come and check on me, I would be sleeping and then she’s wake me up and ask me if I had heard anything. Of course I didn’t cuz I was sleeping.

Things have settled down a bit but we still hear the occasional noises in the house, toilets flushing, balls rolling around, t.v.’s being turned on but it’s not evil and that’s all I needed to know.

You’re Not Afraid of Your Ole Grandma, Are You?