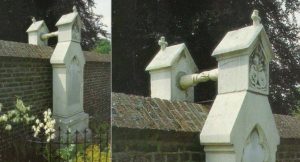 In the kitsch town of Roermond in the Netherlands lays the grave of two lovers, 130 years later still holding onto their love in spirit.

They are the tombs of a Catholic lady and her Protestant husband who could not be buried together.

In the Protestant part of this cemetery, J.W.C van Gorcum, colonel of the Dutch Cavalry and militia commissioner in Limburg, is buried. His wife, lady J.C.P.H van Aefferden, is buried in the Catholic part. And a wall separated the Catholic and protestant burial grounds.

They were married in 1842, the lady was 22 and the colonel was 33, but he was a protestant and didn’t belong to the nobility… this naturally caused quite a commotion in Roermond.

However, despite all of the taboo in 19th-century society, the couple’s marriage lasted for 40 years, only ending with the colonel’s death in 1880 and he was buried in the protestant part of the cemetery nearest to the wall.

Eight years later, when his wife passed away, her wishes were that she wanted to be buried next to her husband, and not in the family tomb. But as
Pillarisation was still in effect at the time, this was impossible, as it was against the law.

However, both husband and wife were to be linked together for eternity in a different way, she was to be buried on the other side of the wall with the couple facing one another. Two clasped hands connect the graves across the wall.

How to Have a Lucid Dream – Wake up in a Dream