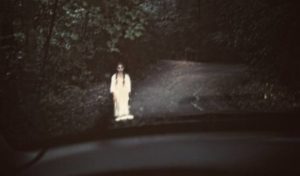 Lick Road which is located just outside Cincinnati, is home to an urban legend surrounding a woman called Amy. There are several variations of the story, but they often go along the lines that Amy was a 30 year old woman said to have been killed along Lick Road by her boyfriend.

It is said that at you may hear her screams in the night coming from the field, hear her footsteps, or catch a glimpse of a woman in white walking by. The most popular story is that if you park here and just sit and wait, Amy will write the words “Help me’ in the condensation on you windows.

It is also said that if you park facing the path, shut off your engine, and flash your lights 3 times, her apparition will come towards you down the path.

Until it was recently replaced, one of the street signs on Kemper road, just before you reach Lick road, had the name ‘Amy’ spray painted across it, which set a creepy tone in itself.

Amy was getting ready for her wedding. She was running late, so she was in a hurry. She drove up Lick Road quickly, but just as she came to the train tracks she was hit by a deer and her car spun out of control.

It stopped spinning on the tracks, and Amy was knocked unconscious. She came-to just as she heard a train coming. She couldn’t get her car started in time and the train hit the car, killing Amy.

The legend says that if you do this then you go through what Amy did. You hear the hooves of a deer alongside your car, then your car jolts as if it was hit. Then you hear a train coming, your car shakes, and then it all stops. Amy then appears and asks you for a ride to the church where she’s to be married.

A third version connects Amy with an old abandoned bridge located in the woods off Lick Road. The story says that if you stand in the middle of the bridge and shout, “Amy, I have your baby!” that her ghost will appear and chase after you.

The reason why she does this is unclear, although some say Amy is angry at having been killed before she was able to have a child, so her ghost considers what you’re shouting to be your way of mocking her. But some say that Amy’s ghost comes after you because in life, she secretly gave birth to an illegitimate child that she killed by throwing it off the bridge.

So her ghost comes after you because she thinks that you know her secret.

Reader’s story: Why Did They Choose Me?