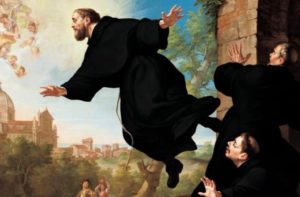 For centuries, levitation has been associated with religious, mystical, or magical practices. For example, according to Catholic tradition, some individuals who were later declared to be saints were said to levitate when in a trance or state of ecstasy or rapture.

Many believers in levitation say that this phenomenon is caused by psychokinesis, whereby a person’s mind can affect the physical world. Levitation (from Latin levitas “lightness”) is the process by which an object is suspended by a physical force against gravity, in a stable position without solid physical contact.

According to some accounts, 230 saints had this ability to varying degrees. Saint Teresa of Avila (1515– 1582), for example, wrote about how she would levitate in church. In some Eastern religions, levitation is said to be a skill developed by practicing certain breathing techniques and mental exercises to produce the altered mental state necessary for self-levitation.

The most famous was probably St Joseph of Copertino, born in 1603 in Apulia, Italy, who reached a state of religious ecstasy that allowed him to defy gravity. He is said to have levitated over a hundred times in his life, and it was the demonstration of his rapture-induced ability in front of Pope Urbain VIII that led to his canonization.

Eastern philosophies and religions teach that levitation can be achieved through a devoted study to fully harness the body’s life force. This natural energy is called ‘Ch’i’ or ‘Ki’, and is said to be controlled by extensive yogic training.

The phenomenon of ‘yogic hops’, where a person can make short levitational movements using transcendental meditation is also advanced by Eastern teachings. The focus is placed less on extreme emotion, but more on visualization and breath control to summon up all latent energy within the body.

One person who became famous for levitating in public was Daniel Dunglas Home, a British medium who lived in 1853, when he levitated several times without seeming to be able to control his movements.

Later, however, he seemed to grow skilled at choosing where, when, and how he would levitate, even giving demonstrations before large audiences. In his most famous demonstration, which occurred in December 1868, he went into a trance, rose from a chair into the air, floated out a window, and then hovered outside the window for a few seconds before floating back inside, landing on his feet, and sitting back down in the chair.

Home’s séances also involved the levitation of tables, chairs, and other objects, as did the séances of many other mediums of his day. At the time, this was attributed to spirits who were called into the séance room by the medium. Skeptics suggested that Home used some kind of mechanical device to levitate himself and various objects in the room, or that someone had in some way caused the witnesses to experience hallucinations.

There is no proof, however, that cheating of this sort occurred. Moreover, witnesses insisted that they had not been having a hallucination when they saw Home go out the window.

Adding credibility to this insistence is the fact that three years later, one of the most esteemed scientists of the nineteenth century, Sir William Crookes, saw Home levitate and declared that, as hard as it was to believe, he knew that his eyes were not lying.

Most scholars avoid delving into historical records of levitation and other forms of psychokinesis. Dr. Michael Grosso, however, has deliberately delved in. The implications concerning human nature and its latent potential are as important to understanding our present and future as any lessons history has to offer, he said.

“It seems to me that if … any of the stories about levitation are true … they’re important for at least one major reason,” Grosso said. “They add to the evidence that renders the idea of materialism quite untenable.”

St. Joseph of Copertino (1603–1663) sometimes hovered a few inches above the ground, sometimes flew high in the air—in front of large crowds all over Italy. The church canonization process involves in-depth investigations, and thus many written records, including 150 eyewitness testimonies, providing detailed information about Copertino’s levitations.

Some people today may tend to dismiss any such accounts as the delusion of religious fervor or the backward superstitions of a relatively primitive society. But, said Grosso, “A fact is a timeless entity.”

Regarding potential objections from skeptics, he said: “It doesn’t hold water—not for 35 years, and all the witnesses that were involved. … The character of the witnesses was of the highest order—cardinals, a pope, the inquisitors themselves.”

“There are ways back to the poetic, magical, and transcendent dimension of human experience,” Grosso said. He received his philosophy doctorate from Columbia University and is unofficially affiliated with the Division of Perceptual Studies at the University of Virginia.

He has written a book about a particular case of levitation that he said gives every indication of being genuine. He was under contract with Oxford University Press to publish the book, but his contract was terminated when he refused to tone down the claims about levitation.

“The church at the time didn’t have a motive to falsely boost a performer of miracles,” Grosso said. There’s no reason to believe the church records give anything other than the hard facts, he added. Copertino faced as much distrust as welcome from the church over the decades. He was moved from location to location and received vague warnings against levitating—likely because he was powerful in his ability to draw a large following wherever he went.

Copertino was even under a kind of house arrest in Rome at the same time as Galileo Galilei, albeit for very different reasons. One was a mystic, the other a driving force of modern science, both were viewed with mistrust.

The church could have easily labeled Copertino a heretic instead of a saint—it could have explained his levitation as a symptom of diabolical possession. He did stand trial. But, said Grosso, the inquisitors “could see this guy had no secret motives, he was completely humble, and he was embarrassed by his abilities.”

Skeptics suggest that instead of triggering actual levitation, the altered mental state is causing hallucinations that make the experiencer only think that he or she is able to fly.

This does not explain, however, why witnesses to public levitations insist that they saw the experiencer rise from the ground. Some psychics believe the power needed to levitate ourselves is a naturally inherent psychokinetic power.