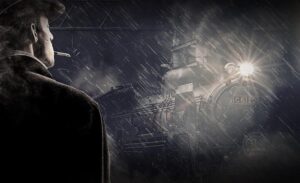 Old-time railroaders in western Pennsylvania often told tales about Wild Tom Skelton, whose ghost was fond of standing on the tracks as the thundering steel horses bore down on him, leaning on his long gun with a forlorn look in his eyes, cursed to search for all eternity for his beloved Maria.

The tale of Tom Skelton is one of heartbreak on the wilderness frontier of present-day Indiana County, and has been passed down through the generations, with each subsequent generation adding its own spin to the classic yarn.

But what is the true origin of the story of Wild Tom Skelton’s wandering spirit, known throughout western Pennsylvania as the Ghost of Packsaddle Gap?

The earliest recorded version of the ghost story dates back to 1851, when the legend was written about by Dr. Frank Cowan, a physician from Greensburg who served as President Andrew Jackson’s personal secretary.

Cowan, who might’ve based his version of the tale on stories he had heard from local residents, related that Pennsylvania Railroad trains rounding the horseshoe curve along the Conemaugh River, just east of Blairsville, had been forced to stop on three separate occasions on account of an old man whose figure was illuminated by the headlamps of locomotives passing the gap cut through Chestnut Ridge.

According to Cowan, the trainmen– certain they had struck the unfortunate trackwalker– would search the mountainside and river bank for the bloodied remains.

“But the light of the lantern has not revealed to the engineer, nor the light of day to the laborer, the mangled body of Wild Tom Skelton, the weird old man that haunts the Packsaddle Gap,” wrote Dr. Cowan.

Long before the white man settled the region, an old Indian trail ran along Chestnut Ridge. When the first settlers arrived, they used this trail to push their way westward, and in the years that followed, the towpath of the Pennsylvania Canal followed the same course. When freight trains supplanted canal barges, the Pennsylvania Railroad laid its tracks over this ancient Indian trail.

Back when the trail was used by pioneers, there was a family by the name of McDowell who came to settle in this wild region. The patriarch of the family was Donald McDowell, a sickly man who lived with his wife and their blind daughter, Maria, in a cabin at Packsaddle Gap.

Because of her striking beauty the local Indians had taken to calling the young woman “New Moon”, and the nickname stuck with her. It was Tom Skelton, a strapping, young frontier hunter, who helped the infirm patriarch of the McDowell clan construct the cabin, and it was during this time he met and fell madly in love with Maria. 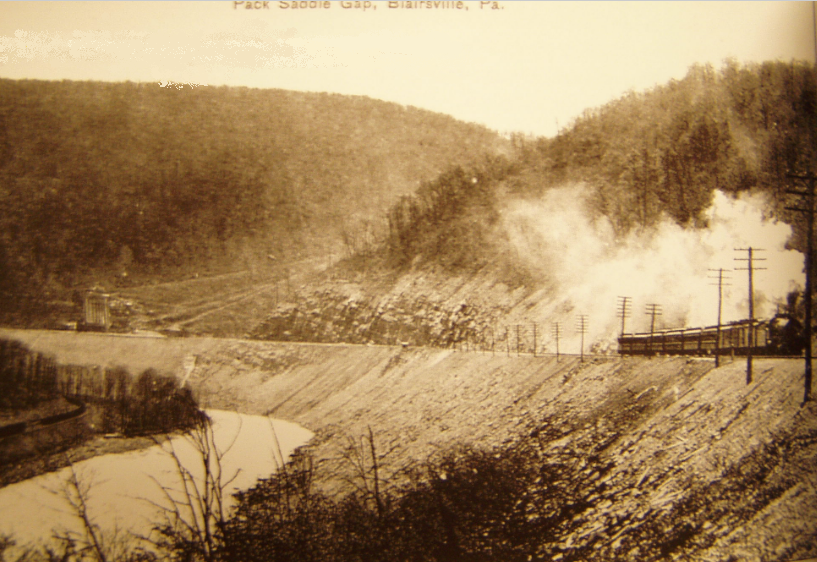 As Donald McDowell’s health continued to decline and death seemed imminent, Tom promised the old pioneer that he would look after his widow and only daughter. And when Donald passed away, Tom dug his grave and gave him a proper burial.

Tom was fully aware, however, that his was a tall promise to keep; for the childhood illness that had left Maria blind had also left her frail and weak, and McDowell, who learned how to make medicine from the Indians, had made a daily routine of gathering snake-root and pipsissewa to treat her frequent coughing fits. Unfortunately, the only place where pipsissewa grew was in the shadow of a lone cedar tree high upon the craggy sandstone cliffs across the river.

With widow McDowell too old and frail to gather these herbs, Tom Skelton eagerly volunteered, but eventually there came a time when the sought-after plants were in short supply. Tom widened his search, disappearing for days at a time with his axe and rifle, in search of the valuable herbs for Maria’s medicine and small game for the dinner table.

Though blind, Maria knew where she might find snake-root and pipsissewa and she told her mother that she would go out and forage for these ingredients by herself. Armed with a hoe, Maria carefully waded across the Conemaugh and trekked into the dark hollow of Packsaddle Gap.

As fate would have it, Tom was descending Chestnut Ridge on his way back to the cabin when he heard a rustling in the brush near the lone cedar tree atop the sandstone bluff. Thinking it was a deer, Tom fired his rifle and raced to the spot where the creature had fallen.

But his joy gave way to horror as he came upon the crumpled body of New Moon. He had shot the girl he loved through the breast. Though she was still clinging to life, Tom knew that the wound was fatal. Overcome by grief and anger, he screamed to the heavens, vowing to take his own life.

“No, Tom,” pleaded the dying young woman. “Don’t take your own life,” she gasped in a weak voice. “Twas only God’s will. Go tell my mother that I’m gone, and give me one final kiss. Though I could never be yours on earth, I’ll always love you in heaven.”

The sky darkened as Tom made his way back to the cabin, and by the time he told Maria’s mother that her beloved daughter was dead the rain was pouring down. Fearing that the storm would soon make the river uncrossable, Tom waded across the Conemaugh, determined to retrieve Maria’s body.

However, when he reached the other side he was so exhausted that he collapsed on the river bank. It was a mighty burst of thunder that finally awakened him, and when Tom cast his gaze to the top of Chestnut Ridge he saw that the lone, tall cedar had been splintered by lightning.

But things only got worse. As the waters of the Conemaugh continued to rise, Tom scrambled up the ridge for safety and watched in helpless horror as the McDowell cabin was swept away, taking the old widow along with it. Tom eventually made it to the summit where his lover’s body lay cold and lifeless, and was astounded to discover that a rock slide had exposed a peculiar outcropping of rock that, when viewed in profile, bore a remarkable likeness to the old pioneer, Donald McDowell.

For generations this sandstone rock formation could be seen by travelers along the old Indian trail and, later, passengers on the Pennsylvania Railroad. Then, in September of 1903, the railroad detonated 250 charges of nitroglycerine and collapsed the side of the mountain in order to make room for two additional tracks and to straighten out the deadly “horseshoe curve” where so many engineers claimed to have encountered the ghost of Packsaddle Gap.

And what a mighty explosion it must have been; the September 28, 1903 edition of the Latrobe Bulletin reported that it was “the greatest blast that ever echoed through the Allegheny Mountains.”

After this alteration of the landscape, sightings of Wild Tom Skelton’s ghost diminished greatly, though some veteran railroaders reported to have seen the apparition well into the 20th century.

By the 1950s the story of the ghost of Packsaddle Gap had become largely forgotten, until a peculiar event rekindled interest in the legend. In June of 1971, the landscape was once again altered, this time by the Penn View Mountain Railroad.

During the excavation a large sandstone boulder slid down an embankment, and workers were astonished to discover two crystal-clear moccasin imprints embedded in the rock.

Could these be the footprints of Wild Tom Skelton? Perhaps it was on this boulder Tom stood when he watched the McDowell cabin being swept away by the raging waters of the Conemaugh River.

Or perhaps these were the moccasins worn by Maria McDowell on day of her tragic and unfortunate death. And perhaps the answer to this riddle is still waiting to be found in the rocky hollow of Packsaddle Gap.