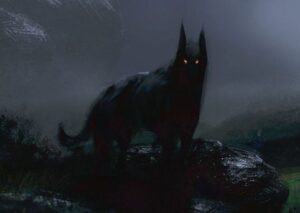 Phantom black dogs are well known in ghost lore all over the world. They lope about lonely country roads, along seashores, in graveyards, and in remote forested areas and fields. In some areas it’s bad luck to see one; they are omens of misfortune and even death.

Black dogs are huge—bigger than even the largest breeds. Their size as large as a calf. They have fiery yellow, green, or red eyes, and sometimes their entire body glows with an eerie light. Accompanied by the sound of chains, also can change its shape.

They go by many names, such as devil dogs, demon dogs, hellhounds, and yell hounds. It is called the Barguest in northern England. In Devon, England, the Whisht hounds are headless black dogs that roam the moors with their master, the pagan god Odin. (“Whisht” means “spooky.”).

A fearsome Black dog appeared inside a church in Bungay, Suffolk, England, on August 4, 1577, accompanied by “fearful flashes of fire” during a violent thunderstorm. It rushed down the aisle, killed two people and injured a few others, then appeared 7 miles away at the church in Blythburgh, where its claws left burn marks on the church door.

In 1928, a Trinity College student was fishing in a river in County Londonderry, Northern Ireland, when a Black dog with blazing red eyes came toward him in the shallow water. Terrified, he climbed a tree, and the animal looked up at him and snarled as it passed. 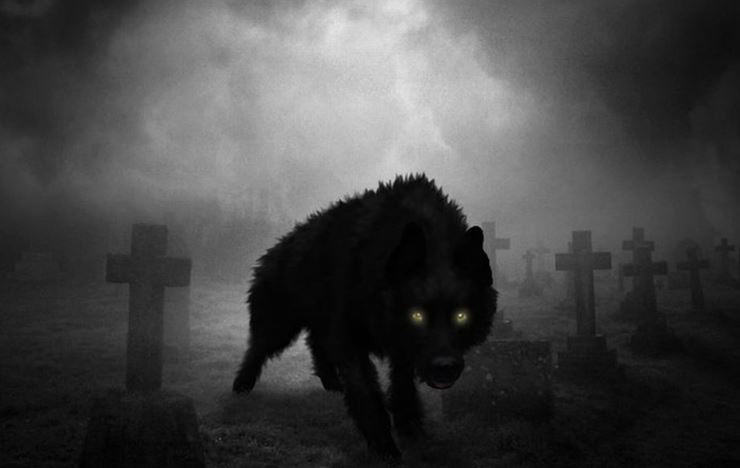 In 1949, a waterworker near Keresley, Warwick, England, was confronted early one morning by a huge Black dog sitting on its haunches. Its glowing eyes watched him as he edged around it and ran away.

In the winter of 1959 or 1960, a twelve-year old boy and his mother saw a Black dog with a huge head peering into their window on Sharpe Street in South Baltimore, Maryland. Its eyes were oval-shaped and bright red or yellowish. Later, the boy went outside but could find no tracks in the snow.

On April 19, 1972, British coastguardsman Graham Grant was on watch at Gorleston, near the harbor entrance to Great Yarmouth, Norfolk, England, when he saw a large, black hound on the beach. It alternatively ran, then stopped and looked around, and after a short time it vanished. Grant said there was nowhere it might have hidden.

On April 30, 1976, a black-and-brown dog was seen in Abingdon, Massachusetts, feeding on a Shetland pony it had killed.

On October 31, 1984, a Mr. Lee was driving toward Molland, Devon, England, when he saw a huge, black great dane run toward the road at him. As Lee braked to a stop, the animal walked up to the hood of the car, looked at him, and vanished.

Victoria Rice-Heaps encountered a huge Black dog with glowing red eyes as she was driving past Hodsock Priory near Worksop, Nottinghamshire, England, early in the morning of May 11, 1991. It was about 18 inches taller than a great dane and seemed to be dragging something across the road.

In 1990’s late on a Saturday night Beth and Jeremy are heading home to Hagerstown, Maryland. Jeremy is driving his dad’s SUV. A fog has settled over the road that runs through the hilly South Mountain terrain. The area is famous as a haunted place, and the fog intensifies the spookiness of the night. Ghosts are very much on the minds of the teens; they’ve just been on a ghost tour of Harpers Ferry, West Virginia, a town known for its Civil War–era ghosts.

There aren’t many other cars on the road, and Jeremy’s headlight beams don’t penetrate the fog very far ahead. All of a sudden a dark shape looms out of the mist. It’s a huge dog with enormous paws, smack in the middle of the road.

Its glowing yellow eyes stare straight at Jeremy. Beth screams as she sees the dog, too. Jeremy slams on the brakes and swerves, knowing that he’s probably going to hit the creature, which is too close. The SUV shudders with the sickening thump of impact. 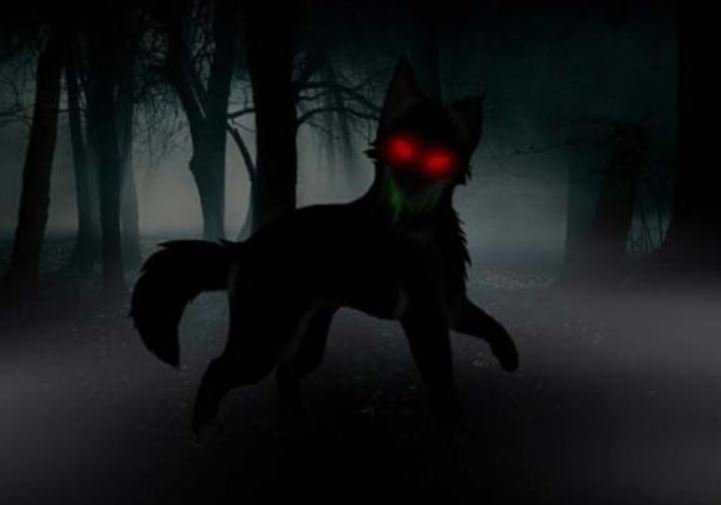 Jeremy stops, and the shaken teens get out and look behind them, half expecting to find the mangled body of a dog. They are shocked to find no trace of the animal, alive or dead. There is no damage, not even a scratch, to the SUV. Jeremy and Beth have just had a frightful encounter with the Snarly Yow—South Mountain’s famous spectral black dog.

The most famous black dog in English lore is the fearsome Black Shuck, a calf-sized dog whose eyes are red even though it has no head. A phantom collar of chains rattles as it runs. Black Shuck is also called Galleytrot, the Hateful Thing, the Shug Monkey, Hellbeast, and the Churchyard Beast.

The origins of many black dogs are lost in time. They may have been once regarded as guardians of places. Their black color and terrible appearance have demonic associations and make them natural companions for the Devil, demons, sorcerers, and witches. In England and other parts of Europe, phantom black dogs once were blamed for livestock killings.

Sir Arthur Conan Doyle, the creator of Sherlock Holmes, drew on the legends of Black Shuck and the Whisht hounds in his tale The Hounds of the Baskervilles.