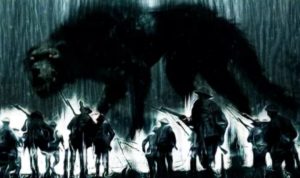 In 1914, German troops had occupied Mons and the British, in what was their first foray into battle during World War I, valiantly marched in to try and liberate it, despite being heavily outnumbered. They soon however were sustaining large casualties against the German onslaught, and the battle turned into perilous trench warfare as the tenacious British forces dug in and continued the fight, with both sides pummeling the other constantly with gunfire, artillery fire, machine gun batteries, as well as hand to hand combat in the blood soaked mud of the trenches.

Between the trenches of the two enemy sides was what is referred to as the no man’s land, a term was used mostly in World War I, and refers to the area that lies between the trenches of the two enemy sides that both lay claim to but are afraid to move into openly out of fear and uncertainty about what will happen if they do. No man’s lands were typically heavily defended and fortified on both sides and any movement into them typically resulted in immediately coming under intense enemy fire, thus ensuring that these zones become barren wastelands where no one dared to tread.

And it was in this grimmest of circumstance that the story of the Hound of Mons came about.

A chronicle was published in 1919 by Canadian veteran F. J. Newhouse, describing the story of a gigantic otherworldly hound that mauled British soldiers in No Man’s Land. The publishing claimed that this hound wasn’t your typical Hellhound or phantom, but the intentional creation of a horrific German experiment. According to Newhouse, Dr. Gottlieb Hochmuller had been performing an array of experiments to develop a powerful weapon to sway the war in Germany’s favor.

He roamed from one asylum to another, and finally found a man who had gone mad in his hatred for England. He then extracted the brain out of the madman with the consent of the German Government and inserted it into the skull of a Siberian wolfhound. While the madman died, the dog, with tender nursing, grew powerful and notorious.

Once ready, it was set free to hunt down British soldiers in the battlefield of Mons. The days of nightmare began on November 14, 1914, when Captain Yeskes and four comrades from the London Fusiliers went to patrol the No Man’s Land. They never returned.

After many days their bodies were finally recovered, with their throats ripped out and gaping teeth marks upon the corpses. Nights later a terrifying howling was heard from the darkness. From then on, more and more soldiers would disappear and die in the No Man’s Land, with the same horrific injuries to their throats and bodies.

Every now and then, a monstrous howl was heard, and sentries noticed with dread a big gray brute of a dog prowling the grounds of the No Man’s Land.
For two years the hound prowled the battlefield of Mons, gaining an ever growing list of victims and instilling horror in the troops. Then, as suddenly as it had appeared the hound was gone and the attacks ceased.

At that time, civilians were suspicious of the story, and passed them off as the ravings and hallucinations of a war addled mind, after all, the story seems to be something right out of an Edgar Allan Poe horror story, but Newhouse claimed that certain secret ‘papers’ had been released from Hochmuller’s house, which proved the legend. Unfortunately, the papers were never heard of again.