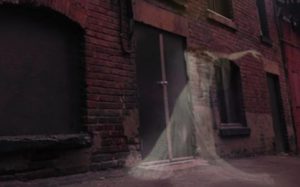 The bright and sunny Galapagos Islands, far out in the Pacific Ocean, seem like a strange place for a ghost! But according to the locals, the former American Air Force base is home to a wandering spirit who targets lonely men late at night.

“The Headless Gringa” crushes her victims in their sleep and waylays solitary travelers. Here’s the story, as the locals tell it.

The American Air Force Base

During World War Two, the American military feared that the vitally strategic Panama Canal would be attacked and/or captured by the Japanese. They looked for a place where they could put an air force base which would protect the canal and give plenty of warning of any sort of invasion.

The Galapagos Islands, on the equator some 500 miles from the mainland, were perfect. The United States quickly made a deal with the Republic of Ecuador, which owns the islands, and a base was hastily constructed.

The base was in operation until shortly after the war. At its height, there were about 5000 men there, as well as airstrips, barracks, a casino/bar and even a small bowling alley and movie theater. The soldiers there busied themselves patrolling for enemy ships and submarines, but the feared invasion of Panama never materialized and none of the forces stationed in Galapagos ever saw any combat.

After the war, the US servicemen left and gave the stripped-down base to Ecuador, which put a military base of its own there, using the same airstrips and barracks buildings the Americans had left behind.

The best structure was the old bar and officer’s quarters, a sturdy stone building referred to by the Ecuadorians as the “Stone House.” But the Americans left behind more than barracks and airstrips, it seems.

The Legend of the Headless Gringa

According to local legend, a serviceman and his girlfriend, both Americans, lived at the base (“gringa,” by the way, is a local term which refers to an American or European woman). The girlfriend was cheating on the soldier, and he found out about it.

In a jealous rage, he killed her by pushing her off a cliff: as she tumbled, her head got caught on something and was torn off.

The soldier covered it up, hiding the body and telling everyone she had gone swimming and not returned. It was plausible: currents in Galapagos can be tricky.

The Gringa and her Supernatural Powers

Although the Americans left, the ghost remained. Some of the old American buildings (including the Stone House) are still in use by the Ecuadorian Navy and Air Force, and those are where she is usually seen or felt. She is known in Spanish as “la Gringa sin Cabeza,” or “the Headless Gringa.”

She appears only at night to men who are alone. Those who have seen her claim that she appears as a dark, misty form, obviously human but headless.

Even so, there is something about her that draws the men, who claim that she can bewitch them. Some men claim that she has a perfume like palo santo (a fragrant tree common on the islands) but when she is angry she smells like rotting flesh.

Sometimes, she will accost men who are sleeping. The sleeping man feels a weight, as if someone has crawled into bed on top of them. The weight quickly becomes oppressive, crushing the man. The moment he wakes up, the weight and feeling are immediately gone.

The Headless Gringa likes to waylay solitary men walking around the base at night. She can disorient them: someone walking in the dark to the barracks may suddenly find himself instead at the port or the airstrip. Sometimes she seduces the men, trying to lure them to solitary places.

In one famous episode, an Ecuadorian soldier got drunk, stole a small pickup truck (the only vehicle on the base) and drove into a communications pole, incidentally knocking out radio to and from the airport for a while.

He was badly injured but survived, and said that he had been drinking when he saw the ghost. She appeared as a beautiful woman and bewitched him. He had stolen the truck in order to find more alcohol because she had told him to.

There are no stores on the military base: the nearest one was on the next island, so the man was either very drunk, very stupid, or hexed by a ghost.

According to the men who first arrived at the scene of the crash, the ruined truck smelled of palo santo and rotting flesh.

The Ecuadorian servicemen who are stationed on Baltra take the Ghost of the Headless Gringa very seriously.

One former officer reported that the ten or so soldiers who were quartered at the Stone House all slept in the same room (even though they didn’t have to), never went out alone after dark and made their poor dog stay outside all night “to guard them.”

They reported that sometimes the lights of the small truck (the same one the soldier stole) would sometimes flash and the horn would beep, as the ghost tried to trick the men into coming outside.

Thousands of tourists flock to the Galapagos Islands every year, drawn by the beautiful islands, the world-class diving and snorkeling, and the chance to follow in the footsteps of famed naturalist Charles Darwin and see for themselves the famous finches which he used to illustrate his theories.

These visitors will not have the chance to see the Headless Gringa, however. The military base on Baltra is closed to foreigners, and there are only a handful of soldiers, airmen and sailors there at any time.

Most visitors land on Baltra (using the old American airstrip, now modernized) but quickly take the ferry to nearby Santa Cruz Island for a transfer to Puerto Ayora, the largest town in the Galapagos.

There’s no need to be afraid if you’re planning a visit to the islands: the Headless Gringa shows no interest in leaving the base to haunt Puerto Ayora or any of the fancy cruise ships!