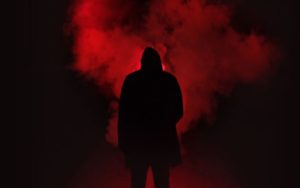 According to legend, the ghost known as “the little red man,” appeared to some of the nation’s most notable personalities for more than ​260 years, garnering a reputation as a harbinger of tragedy.

The ghost seemed to center its activity in Paris, at the Louvre and Tuileries palaces. It is mentioned in scores of books, official records, and even Napoleon’s diaries.

Catherine de Medici is said to have been the first person to have confronted the apparition. It was in 1564, during the construction of the Tuileries, that de Medici came face to face with a gnome-like creature dressed completely in scarlet.

It soon became apparent to haughty Catherine that her unannounced companion was not a man of flesh and blood, and she interpreted the strange visit as an omen of bad luck.

As Catherine had already begun to foment trouble between Roman Catholics and Protestants in France, and she induced the king to order the terrible St. Bartholomew’s Day massacre of the Huguenots, scarlet was an appropriate color for the ghost to have worn.

In 1610 the little red man appeared to Henry IV just before the monarch was assassinated by an insane schoolteacher.

In 1792 startled chambermaids discovered the scarlet-clad gnome in the bed of Louis XVI when the threatened king was making a futile attempt to escape the machinations of the French revolutionaries. A few months later, guards claimed to have seen the little red ghost in the prison where Louis and Marie Antoinette awaited their turn with the guillotine.

In 1798 the red-hued entity first appeared to Napoleon, during the military leader’s Egyptian campaign. The spirit is said to have materialized before Napoleon and to have made a bargain with the ambitious officer. According to the terms of the contract, Napoleon was to enjoy the victory and triumph on the battlefields of Europe for a decade.

The Little Red Man seemed to follow Napoleon through all of his campaigns and provided a rough map of some of the events of Napoleon’s life. People at the Tuilieries were familiar with stories of The Little Red Man of Destiny appearing to Napoleon while he stayed at the palace.

The strange visitor said that he had advised the rulers of France in the past and declared that he had appeared to Napoleon in order to counsel him as well. The ghostly advisor told the military genius that he had been at his side since he had been a schoolboy. “I know you better than you know yourself,” the spirit chided him.

The entity told Napoleon that his orders to the French fleet had not been obeyed. While the Egyptian campaign had begun on a note of triumph with the Pyramids, the ghost told him that the enterprise would fail; Napoleon would return to France and find her closed in by England, Russia, Turkey, and an allied Europe.

As the scarlet ghost predicted, the Egyptian campaign failed. In 1809, after the Battle of Wagram, Napoleon made his headquarters at Schonbrunn, and his mysterious advisor once again appeared to him. Napoleon had conducted 10 years of successful campaigning, and he asked his supernatural advisor for five more years of guaranteed triumph.

The ghost granted his request with the admonition that the greedy conqueror should not launch a campaign that would take him on Russian soil. Napoleon ignored the warning and met with a disaster that proved to be more significant than the physical defeat he suffered at Waterloo.

The red ghost made his third and final appearance before Napoleon on the morning of January 1, 1814, shortly before the emperor was forced to abdicate. The gnome first appeared to Counsellor of State Molé and demanded that he allowed to see the emperor on matters of urgent importance.

Molé had been given strict orders that the emperor was not to be disturbed, but when he told Napoleon that a red man wanted to speak with him, the emperor asked for the mysterious stranger to be granted immediate entrance.

It is said that Napoleon beseeched the ghost for time to complete the execution of certain proposals, but the prophetic messenger gave him only three months to achieve general peace or it would all be over for him.

Rather than attempting to bring peace to Europe, Napoleon desperately tried to launch a new eastern campaign. Such a move left Paris to fall into the hands of the allies; and on April 1, three months after the red man’s final visit to the emperor, Talleyrand and the senate called for Napoleon’s abdication.

In 1824 the ghost’s last reported appearance occurred, when Louis XVIII lay dying in Tuileries Palace. The mysterious, gnome-like apparition has, however, earned itself a strange but secure position in French history.