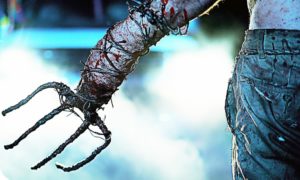 It was said that the ghost of a dead man killed Peter Maclntyre, a Scottish immigrant who came to Tracadie, Prince Edward Island aboard the ship Alexander, shortly after the year 1772.

This story took place on a dreary October night, and a fine mist swept inland from the sea. Seated about the pot-bellied stove in the country store, were a group of farmer folk whose talk had turned from problems of the day to current superstitions.

Suddenly the door swung open, and in walked the big Peter Maclntyre. The group immediately made room for him to sit. Finally, Ben Peters mentioned having seen a light in the old French burying-place at Scotch Fort.

It was reportedly a huge ball of fire, about the size of the wheel on a cart, that danced across the graves and lit up the whole cemetery so that the grave stones stood out in plain view.

Good ole Maclntyre, being tough and all, touched fire to his pipe and said, “What nonsense, you talk. I’ve been around here longer than most of ye and devil the thing I’ve seen that couldn’t be explained. Why fellers, I’d walk through the old grave yard this very night and never give it a second thought.”

People knew that Peter Maclntyre was the type of man who often talked boldly in the presence of others. Everyone knew that the cemetery was haunted.

“Yer nothing but a bunch of superstitious women,” snorted Maclntyre. “Ghosts and the like of them are for the birds.”

Feeling insulted by the comment, the other men decided to put him to the test. One pound of tobacco was the prize if Maclntyre would visit the cemetery that night and stick a hay fork in a grave to prove to that he was actually there.

The big grandfather clock was striking the midnight hour as the storekeeper announced it was closing time; and all decent folk should be in their beds.

After reviewing the challenge over in his mind, Maclntyre accepted and immediately set out for the graveyard with a fork in hand. Early the next the morning the people of Tracadie were in a great dither.

There were many rumblings here and there, and incoherent whisperings that came from little groups assembled to discuss the mysterious disappearance of their bachelor neighbor, Peter Maclntyre.

Maclntyre’s shack showed the place had not been occupied the night before. The only visible sign of life was a cat lying on its owner’s straw mattress. The fireplace was a bed of cold ashes, and, from the nearby barn came the cries of hungry cattle, pigs and sheep.

Rumors soon gave way to fear – – fear that some dreadful thing had overtaken the man who was foolish enough to risk his life in a haunted graveyard, especially at such an unholy hour and on such a woe some night.

So four men were mustered together to solve the mystery. The cemetery was a small clearing in the heart of the forest, reached by means of a narrow footpath, permitting not more than two persons to walk. Every now and then the search party stopped to peer through the branches of the trees, their voices never above a whisper.

Finally, they were out of the woods and staring in astonishment at the sight that met their eyes. On the cemetery grounds, they were horrified to see the body of their neighbor slumped across a grave – stone dead, and his face turned toward them. It was a face frozen in agony, a haunted, fear crazed face that made the living tremble and wish they’d never seen it.

A second look revealed a prong of the fork driven hard into the grave with a powerful thrust and right through the tail of Peter Maclntyre’s long black coat.