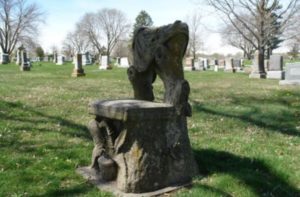 The story of the Devil’s Chairs started in the Appalachian Mountains in the mid-1800s. It is said that on certain nights of the year a chair would come up out of the ground in a graveyard.

If you sat in it you could make a pact with the devil and get whatever you wanted for seven years. After seven years, the devil would come back and take your soul.

The story has changed over the years and now says that if you sit in it you will die within a year.

What are these chairs? Most of them are what were referred to as “mourning chairs” in the Victorian era. They were put in cemeteries next to the grave of the recently deceased by a relative, making a calmer place to rest while visiting.

Most of them are plain, but some were elaborate and may have been what inspired the legend of the Devil’s Chairs. Many of the throne-like chairs have been removed, supposedly by the parents or friends of a teenager who sat in the chair and died soon afterward.

In one Illinois cemetery, a Devil’s Chair caused many teenagers to go to the graveyard to see it. A tale that was going around told of a teen that sat in the chair on Halloween night and soon after was killed in an auto accident.

Since then, more and more teens started slipping into the cemetery at night to see the chair. Finally, with the family’s permission, the cemetery took away the chair and put it in storage.

Most of the tales have not been proved, but one chair in Peck Cemetery, took its toll on a non-believer that sat in the chair laughing that nothing was going to happen to him. Less than a year later he was thrown from a car accident and killed.

Was this a coincidence that had nothing to do with the Devil’s Chair? Could be, but his family thought otherwise. After the teen’s funeral, his father drove out to the cemetery and destroyed the chair with a sledgehammer.

You can believe what you like, but remember the story got started for some reason; if you happen to come across an old stone chair in an Illinois cemetery, you might want to think twice before you sit in it.