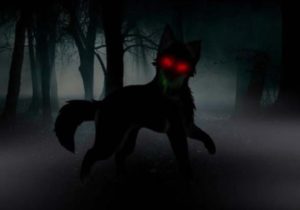 Moeraki is a windswept peninsula in Otago, on the southeast coast of New Zealand’s South Island. Today it’s a popular tourist spot; famous for the rugged coastline, little blue penguins, Moeraki lighthouse, and a phenomenon of nature known as the Moeraki boulders.

The boulders are giant, spherical balls of granite that dot the coastline in small groups. Some say they are a result of the natural action of the waves rolling the great rocks in the surf, others say they are meteorites, and then there are those who believe them to be of a more spiritual nature. Whatever their source, they are a site well-worth seeing.

Before the coming of the Europeans, Moeraki was inhabited by Maoris—small tribal groups who would travel around the coast, fishing and hunting. It was common in those days for the Maoris to keep dogs inside their fortifications that they called their “Pa.”

The dogs were kept for several reasons: guard dogs, pets, and in lean times, they were a source of food. One such dog, a particular favorite of the Kuia (ancient woman), was a great black brute, ill-tempered and stand-offish, but usually a great watchdog barking at all that moved.

He was always a great comfort to the Kuia, for the dog slept just outside her whare (house) and next to the chief’s. Throughout the day, he was forever hanging around the camp looking for food scraps.

It’s rumored that one night the chief, who was coming out of his hut to relieve himself and not looking where he was going, tripped over the wretched sleeping animal.

The old chief fell down and hurt his leg, and the dog howled in fright and promptly bit him, adding to the chief’s woes. The dog ran off snarling and snapping. In a fury, the chief ordered the useless animal be caught, killed, and served up for dinner.

Later that day, while eating kai (dinner), the Kuia looked around for the old dog to give him some scraps. Of course, he wasn’t to be found. She asked of the chief, “Where is the black dog?”

The chief replied, “You’re eating him!” Up jumped the enraged Kuia, overturning all the kai.

She stood back and cast a Makutu (curse) on the chief. It was indeed the last dinner the chief ate—the legends say he choked on a bone of the dog and died as a result of the Makutu.

In her curse, the Kuia said that no one on Moeraki was ever to hurt a black dog again, and from that time to present day, the appearance of a large, black dog on the foreshores at Moeraki is to be considered a bad omen.

Some years later, when the Europeans had arrived and the settlement at Moeraki became a fishing village and lighthouse station, strange stories of a black dog approaching at night started to be told.

In some accounts, the dog would fall in and walk just in front of people walking home, seeming to guide them to their homes. Other times the dog would weave in and out, barking and growling, causing people to become confused and fall.

In a number of cases, people who complained of seeing the dog weave ahead of them suffered serious injury, broken limbs, and on at least two occasions, death.

For more than 150 years, the story has been told, many people have seen the dog, no one claimed ownership, and he has never been seen in daylight hours. Just hope that if by some strange twist of fate you find yourself in Moeraki, the dog that walks you home is not large and black and he does so in a straight line.