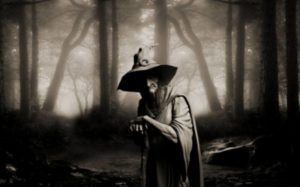 According to the legend, there was a woman named Mary Stockum who had nine children. Mary was a witch, and one of her daughters was mentally disabled. Her second husband killed her mentally disabled daughter, although this didnt seem to upset her a great deal, what upset her was that, when the townspeople found out about the murder, they hanged her husband for the crime, and she vowed to get revenge.

One by one, her remaining children started dying from a mysterious fever. After the fifth child died, the townspeople discovered she was poisoning her own kids. They charged her with witchcraft and she was burned at the stake.

Her remains were buried in the cemetery, but when a sixth child died, they dug her up, cut off her head and reburied it at an unknown location, outside of the cemetery. After that, the remaining two children recovered from their illness and survived.

Today, the cemetery in Coshcoton, Ohio where her body was initially buried is believed to be haunted by the ghost of Mary Stockum. They say many people have seen her ghostly figure roaming through the graves, searching for her dead children and her missing head.

Two teenage boys who visited the cemetery heard loud screams in the distance. A few seconds later, they heard the screaming right beside them and it kept getting closer. One of them jumped into the car and told his friend, “we’re getting the hell outta here.” The boys drove off as fast as they could and never looked back.

One night, a young couple went up and parked in the graveyard, hoping to catch a glimpse of the ghost. The man thought he saw something in the distance, down the dirt road and got out to take a closer look. When he returned to the car he found his girlfriend in a hysterical state.

Her face was pale and she was gibbering like a mental patient. She eventually told him what had happened. She said the ghost of Mary Stockum came up to the car and asked her to follow her into the woods. The girl claimed she was terrified that all she could say was, “What in the name of God do you want?” She said the ghostly woman’s reply was too horrible for her to repeat.