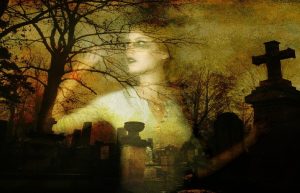 Towards the end of the late eighteenth century, an orphaned baby girl was taken into the Poor House at Newton Abbot. The little girl was given the name Jay (J), as was the custom at the time because she was the 10th girl to arrive at the orphanage.

She was given the name Mary to precede this however as ‘Jay’ had the unfortunate meaning of being another word for a prostitute at the time. Until her teens Mary was more than content at the orphanage, taking care of the younger children.

Mary Jay remained at the Wolborough Poor House until her teens when she was sent to Canna farm for employment which was located outside Manaton. Here she was to be employed as an ‘apprentice’ which meant she would work both in the house and in the fields. This was a hard job with long hours and a heavy workload and it was here that Mary Jay got her nickname of ‘Kitty’.

Not long after she had been at the farm she started to receive the attention of the farmers son which at the time may have seemed a way of obtaining some security for her, but unfortunately as wasn’t uncommon at the time, she soon found herself pregnant and thrown off the farm by the sons furious parents, with a reputation as a whore. (some reports claim she was in fact raped by the farmers’ son).

Kitty knew that once word got around she would never find employment in the area and that only left the prospect of returning in disgrace to the Poor House as a pregnant single mother. Tragically Kitty Jay took a different option and was found hanging in one of the barns at Canna.

The custom of the day was that any suicide could not be buried in the consecrated ground so they were interred at a crossroads, some times with a stake driven through their hearts. This was to ensure that the restless soul of the departed could not return to haunt god fearing mortals.

This was the sad fate of poor Kitty Jay, and she was buried at the intersection of a road and a moorland track. The grave soon became known as ‘Jay’s Grave’ and it did not take long for strange events to start taking place.

On certain moonlit nights a dark figure could be seen kneeling beside the sad little mound with bowed head and its face buried in its hands. Nobody has ever been able to say if the ghostly figure was male or female because it was always wrapped in a thick, black cloak.

Some say it is the spirit of the farmer’s son who stands vigil over the grave of Kitty and his unborn child, whilst others say it is Kitty herself that haunts the site.

Another part of the legend is that there are always fresh flowers on the grave, the placement of which is the subject of local folklore with some claiming they are placed there by pixies, although it is known that the author Beatrice Chase was one person who used to place flowers there before her death in 1955.