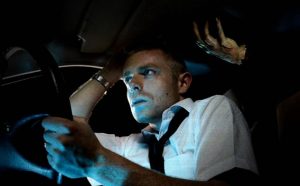 The national park of Dartmoor is a bleakish countryside found in the Southern regions of England, and at its centre sits a sleepy village named Postbridge.

There’s only one road in and out of Postbridge, and that road has the infamous reputation of an exceptional amount of freak automotive accidents: cars spin out of control without cause, veer off into the pastures for no reason, always traveling South from the town.

This has been the case for over one hundred years, but it wasn’t until recently that a survivor was able to explain why, it was the last explanation anybody expected. Welcome to route B3212 through Dartmoor, home of Hairy Hands…

Just to be absolutely clear, “Hairy” is not an odd spelling of “Harry”, the creature or entity that stalks route B3212 in fact has hairy hands. Nobody has ever seen Hairy Hands, just felt him.

While driving out of town from Postbridge witnesses have described the sensation of particularly hairy hands touching them, but the phenomenon didn’t gather reputation until the survivor of a crash told the authorities that a pair of “hairy hands had gripped his on the steering wheel” and spun the car off the road.

As the witness was honest and admitted that the hands were invisible the explanation was written off as him possibly falling asleep behind the wheel.

Then it happened again. A number of years later another survivor unaware of the previous explanation described the exact same experience. Word started to spread through Postbridge and its nearest neighbors Two Bridges, and Princetown, both of which are immediately South and also in Dartmoor on route B3212.

Talk of Hairy Hands became popular specifically in these towns because many of the residents had experienced the same sensation on various parts of their bodies while driving the route, and it’s this space between Postbridge and Princetown that begins to tell us who Hairy Hands is.

Not more than a 15 minute walk from Princetown is the two hundred year old prison of HM Prison Dartmoor. An archaic fortress of a facility more resembling a castle than a prison, HM Dartmoor housed over 6,000 inmates and prisoners of war at any given time between 1809 and 1850.

A large portion of these inmates were captured American sailors from the war of 1812, sailors that upon hearing of the Treaty of Ghent in 1814 expected an immediate release, but this was not to be the case.

A full year passed and the sailors were still imprisoned waiting for transport ships to arrive from America. Held captive by the English, and betrayed by their own country they staged an escape attempt.

The escape would fail when their elaborate tunnels were discovered by a British Lieutenant by the name of Shortland, and the discovery would lead to what could only be called a slaughter. The gates closed around them and the 300 some prisoners trapped in the yard would be fired upon by the British forces.

In all, 271 prisoners died in the yard, another 15 to 20 were seen escaping through the fields headed North, but were badly wounded. With a full-fledged mutiny under way within the walls of HM Dartmoor the decision was made to let them go while focusing attention on quelling the riots.

Over the following months those that escaped would be discovered one at a time dead throughout the countryside, except for one.

An unknown and heavily wounded American sailor is said to have accosted a carriage along what was then the only road and is now route B3212. In his attempt to wrestle control of the carriage from the driver he was crushed and killed beneath the wheels. Whether or not this sailor had particularly hairy hands we will never know.

The question is: how long has Hairy Hands been sitting behind travelers on route B3212?

Occult And The Paranormal: Do Supernatural Occurrences Exist?