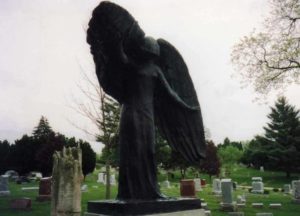 The black angel of Oakland Cemetery is an eight and a half foot tall burial monument for the Feldevert family, erected in the cemetery in 1912. Since that time, it has been the source of many stories and legends in Iowa City — most connected to the mysterious change in color that the angel took, turning from a golden bronze to an eerie black.

The statue was erected by Teresa Dolezal Feldevert, a physician who had immigrated to America from Strmilov, Bohemia, Teresa and her son, Eddie Dolezal, came to Iowa City, where she worked as a midwife. They lived in Iowa City until 1891, when Eddie died of meningitis at the age of 18. He was buried in Oakland Cemetery and Teresa had a tree stump monument erected over his grave. It can still be seen today.

After Eddie’s death, Teresa moved to Eugene, Oregon where she married Nicholas Feldevert, who died tragically just a few years later in 1911. In the wake of this loss, Teresa returned to Iowa City and she hired Mario Korbel, a Bohemian artist in Chicago, to design the angel that would hover over the body of her son and the ashes of her husband. The angel arrived on a railroad flatcar in Iowa City on November 21, 1912.

There have been many stories spread about even the most mundane aspects of the angel’s existence, starting with the date that it was erected in the cemetery. According to local history, provided by people who lived in the city at the time, the angel was installed at the cemetery at the time of its arrival in 1912.

Other sources claim that it was actually stored in a barn for six years and was not erected until after a court case that Teresa brought against the artist, Mario Korbel. The story states that she refused to pay the $5,000 cost of the statue because it did not meet her specification to include a replica of her son’s tree stump monument in the angel monument. She eventually lost the case. 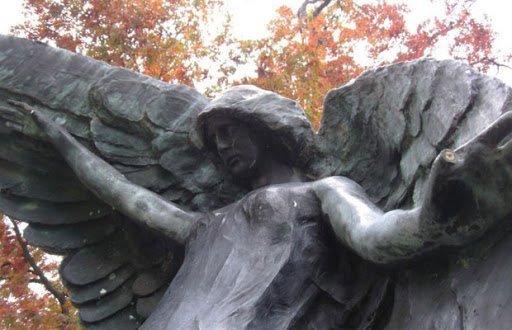 Whatever the truth of this story, at some point after the installation of the angel, Eddie’s monument was moved from its original location to its present site alongside the angel. His remains, along with the ashes of Nicholas Feldevert, were placed in a repository under the angel’s base. Teresa died of cancer on November 18, 1924, her ashes were also placed beneath the angel and soon after, the strange stories began.

Within a few years of its installation in Oakland Cemetery, the glorious bronze angel strangely began to turn black. Most have explained this as the natural oxidation of the metal but not surprisingly, other explanations have surfaced, blaming evil acts, freak storms, infidelity and even murder.

One legend has it that Teresa Feldevert was a very mysterious woman and that her evil caused the angel to turn black. This strange shadowing was to serve as a constant reminder of the sins of her family – and as a warning for people to stay away from her grave. Some claimed that Teresa’s wicked ways were evident in the design of the angel.

Unlike most graveyard angels, which are usually positioned with their head and wings uplifted as a symbol of aiding in the ascent to heaven, the Feldevert angel is looked down to the ground and her wings are not uplifted. And strangely, there is no death date on the monument for Teresa Feldevert.

One legend created another and a variety of stories sprang up, stating that any girl who was kissed at the angel’s feet in the moonlight would die with six months. Others said that touching the angel on Halloween night would lead to death in seven years and, worse yet, kissing the angel itself would cause a person’s heart to stop beating.

Others claimed the angel turned black after a freak thunderstorm on the night of Teresa’s funeral. According to this, the angel was struck my lightning and this is what caused it to turn black.

There are also stories that blame the black color of the angel on infidelity. In this version of the angel story, Teresa allegedly vowed over her husband’s grave that she would remain faithful to him until the day that she died –-swearing that his death angel would turn black if she ever cheated on his memory. The color of the angel, these stories claim, answer the question as to whether or not Teresa remained faithful!

Perhaps the harshest explanation for the angel’s color claims that Teresa’s son did not die from an illness, as the records stated, but rather because she murdered him. These stories claim that she fled to Oregon soon after and only her guilt brought her back to Iowa City. In shame, she moved his body to rest beneath the wings of the angel and soon after, it began to turn back as a reminder of her shame.

And while such stories may bear little resemblance to the truth, they do remain an essential part of the lore and legend of Iowa. For generations, local residents and University of Iowa students have come to Oakland Cemetery, often under the light of the moon, to ponder the mysteries of the angel. She is regarded as one of the region’s most haunted sites, likely based on the odd stories, curses and enigmas attached to her past and present.