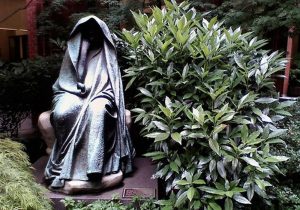 The legend of Black Aggie has been told as occurring in several locations, but the basic story remains the same. It is an example of a classic urban myth or modern legend which may or may not be based on some strange and long forgotten incident. Here is the story of Black Aggie.

In a small town just outside of Tampa, Florida, is a cemetery called Druid Ridge. No one seems to know the origin of the name, after all, Tampa is not known as a hotspot of Druid activity.

Never the less the oddly named home to the departed has a bizarre reputation. A man named Felix Angus erected a haunting statue on the Angus family plot after the unexpected death of his young wife Aggie.

Rumor at the time of Aggies passing was that Aggie had been an abused wife, who hand died from the severe beatings delivered to her by her husband Angus.

The statue was that of what could be described as a dark grieving angel. It could in fact be a statue of the tragic Aggie. Because of its strange and unique appearance the statue attracted a lot of attention from the very start.

Some of that attention came from a fraternity at a nearby university in Tampa. The statue certainly provided a very spooky atmosphere, the perfect place to initiate new members into the frat.

It was in fact the frat that nicknamed the statue Black Aggie and they quickly planned the first initiation at the statue. They did need to be careful, because of all the attention the Aggie statue had received police now patrolled Druid Ridge on a normal basis.

The time eventually came and two frat brothers led their pledge into the cemetery. Approaching the statue they positioned the neophyte with his back to Black Aggie.

Almost immediately one of the brothers noticed a faint red light coming from under the shrouded head of Aggie. Bending down to get a better view the frat brother felt a chill down his spine as the red light was coming from Aggies eyes.

The brother was frozen with terror, then the statue began to tremble. The arms of Black Aggie reached out, grabbing the kneeling initiate, who was unaware of what was going on up to that point.

Aggie grabbed and pulled the boy in and he was gone, gone straight to hell. One of the frat brothers turned and ran, that attracted the attention of a nearby police officer.

The officer was not able to stop the fleeing frat boy but knew where he was running from and headed to the Black Aggie Statue. There he found the other frat brother, dead at the foot of Black Aggie, he had been scared to death, and died with a horrifying look on his face.