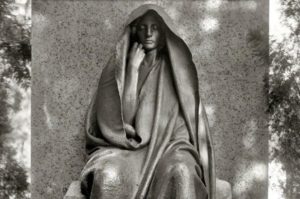 The legend of “Black Aggie” is renowned for her distinguished career of terrifying and catapulting death and ill-fortune upon many a soul.

But Black Aggie, who was named after General Felix Agnus, was not initially the depiction of evil, she was a work of art. But this art was believed to be a purloin facsimile (grave imitation) of a greater work of art, and for this reason, her very birth incited discord from the beginning.

It is rumored by some that this dissension may have initiated the unfortunate events that would come to pass. Even from beyond the grave? So was it a curse that gave the statue life? Retribution from ghosts past? Or just another urban legend? No one can say for sure.

Her legend dates back to her inception. These chilling anecdotes of death and misfortune have been recounted around campfires, slumber parties, ghost circles, and among the superstitious for years. Eventually this yarn made it to newspapers in America.

It was then, that this once innocuous statue earned her claim to fame. In fact, “Black Aggie” would become more famous than her original counterpart.

The cursed statue soon became a symbol of malevolence and fear to those who crossed her path after midnight. But cursed you ask? Many believe so.

And they also surmise that this mysterious statue exhibits supernatural powers. To better appreciate the story of “Black Aggie” first examine her past history and then judge for yourself.

Augustus Saint-Gaudens was an American painter and sculptor. (March 1, 1848-August 3,1907). Born in Ireland, he was brought to America as an infant by his parents. He apprenticed in New York, and later went to Paris where he tutelaged under Jouffroy in the École des Beaux-Arts.

He then went on to Italy for the next three years where he created some of his first works, “Hiawatha” and “Silence.” He later created a statue of Admiral Farragut, in New York and soon gained fame for his work.

Gaudens was commissioned by Henry Adams, a prominent writer and historian, to sculpt a memorial for his wife, Clover Hooper Adams, who had committed suicide in 1885 by potassium cyanide poisoning. Adams paid the artist handsomely for his original creation, made solely for his wife.

It took Gaudens four years to unveil his unprecedented masterpiece “Grief” or “The Peace of God” and “Death” in 1891. It was placed in the Adams plot in Rock Creek Cemetery, Washington, D.C.

Eventually, word of this great artistic accomplishment got out and thousands came to see the esteemed monument.

While “Grief” became known as one of Gaudens’ greatest masterpieces, In 1906, General Felix Agnus hired an artist by the name of Eduard L.A. Pausch, to recreate the statue for his family plot. But rather than creating something original, the artist was said to have partially molded Gaudens’ statue for his recreation.

There were tell-tale signs of the plaster still present on the Griefs’ bronzed surface. When Pausch presented the new art to General Agnus, he was elated. He placed it in the family plot at the Druid Ridge Cemetery, in Baltimore, Maryland in 1907.

Suffice to say, this deed did not go unnoticed by the widow of Gaudens. She saw the copy for herself and noted that the statue was the same, albeit a few changes, and wrote to Agnus. She informed him of the the poor imitation that was placed at the Druid Ridge Cemetery for his family.

By then the artist of the original statue had recently passed on. Had he known of this fraudulent act, he may have rolled over in his grave. Gaudens’ widow hired a lawyer to convince Agnus to remove the counterfeit or she would sue him.

In the end, it was hard for the widow to prove her case and Agnus kept the statue in the family plot. Later, in 1925, the general died at age 86, he was buried at the foot of his beloved statue, along with his wife.

And soon after his death, the legend was born. Stories began to circulate about the cursed statue and with the stories came the name:

The statue at Druid Ridge Cemetery that sits in enigmatic silence, pondering granite dreams, is a true work of art during the day. But at night…

…her eyes burned red at the stroke of midnight. And for those who were unlucky enough to have gazed upon those eyes were struck dead or blinded. To defile her or defy her, by sitting upon her lap, was believed to invite suffering, death or calamity upon oneself.

The following story is about a fraternity dare during Hell Week. One new frat boy pledged to stay the night at Druid Ridge Cemetery and sleep at the foot of the infamous Aggie.

The young man was familiar with the stories surrounding the statue, but he was not superstitious. He scoffed at such tales and willingly went along with the pledge.

The frat brothers followed him out while it was still daylight. Upon reaching Aggie, the statue seemed harmless enough. The boys sat around laughing and joking.

But as the sun began to set, a nervous awareness enveloped the group of frat brothers. They swiftly departed, leaving the new pledge alone in the cemetery.

As the gates of Druid Ridge were locked, the sweeping flashlight of the passing security guard scanned the tombstones. The young man hid among the them avoiding detection.

He sat among the silence of the graves, perhaps looking around, perhaps avoiding the statue’s gaze.

What is known is that at midnight, a blood-curdling scream was heard from somewhere among the tombstones. When the security officer found the young man, he was dead, lying at the foot of Black Aggie.

A look of wide-eyed terror filled his face, his mouth was agape, in a frozen scream. Something had terrified the youth to death. 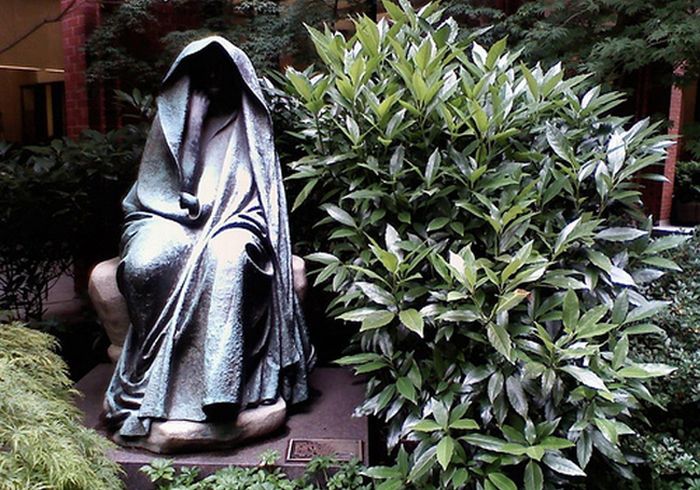 Another story was of some friends who went to see the famous statue during the day. One man scoffed at the rumors and put out his cigarette on Aggie’s hand. When his friend warned him of the danger, he chuckled and waved him away. He was later found dead. Was it fate or something much more sinister at work?

In 1962, one of Black Aggie’s arm was missing. Apparently it had been cut off with a hacksaw. Later, the missing limb was discovered in the trunk of man’s car, along with a saw he used to steal the arm.

Later he claimed the statue made him do it while he was depressed. But could a statue cause a man to become unstable or was this just another curse of Black Aggie?

Eventually the arm was replace and the statue remained at Druid Ridge. Still, word of the evil statue brought every loony out of the woodwork, and problems with vandals soon became an issue.

Even the grounds around the tomb seemed to be cursed, as the grass refused to grow there. The constant barrage of unwelcome visitors overwhelmed the cemetery and it was decided that the statue would be removed.

Years later, a reporter was researching the story of Black Aggie. While going through her history, the reporter became aware of the location of the statue.

It had been moved to it final resting place, in the courtyard of the Dolly Madison House on Lafayette Square in Washington, DC. The infamous statue now sits among the foliage and beauty where she is a permanent resident.

If you ever want to see her, you can visit her in her pleasant surroundings during the day. But by night…

No new stories have surfaced since Black Aggie resurfaced, at least none we have heard of thus far. Maybe the years locked away in virtual darkness drove away the dark vitriol past that surrounded the statue.

And what of the curse? Who cursed the statue? Vengeful ghosts? Or possibly the stigma of dishonesty generated its own brand of ill-fortune upon the superstitious unlucky few.

Maybe the legend of Black Aggie is really no legend at all, but simply another great urban legend to be told around the family campfire for generations to come.