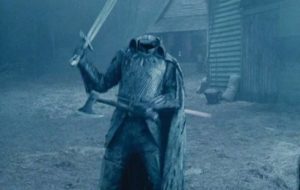 The legend of Big Lizz is set in the American South during the late part of the Civil War. The rich plantation owners were anticipating that the war would soon be over, and the South would lose.

Fearing that the victorious North would confiscate their fortunes, many tried to hide their wealth with plans to recover it at some point in the future.

Such was the case of a plantation owner in Virginia who planned to bury his treasure in nearby Maryland. The man was also a slave owner and one of his slaves was well-known in the area. Her name was Big Lizz, a nickname given to her because of her unusual height, Big Liz was well over 6 feet tall.

As the war dragged on, Big Lizz’s owner forced her to secretly supply the Confederate forces with weapons and other necessities. Lizz however, had other ideas and managed to get messages to the Union troops, most of the supplies intended for the Confederates never reached them.

Then the man hatched his plan to hide his fortune. He located a desolate area in Maryland, loaded up a wagon and, along with Big Lizz, headed toward the hiding spot.

All went well as slave owner and slave buried the treasure. Then just as Big Lizz finished smoothing out the freshly filled hole, the slave owner, with one blow from his sword, chopped off her head. The man who killed Big Lizz was later killed before the war ended but the details of his demise are unknown.

The fortune of the plantation owner has never been recovered, but if you would like to claim the treasure here’s all you have to do. First, drive out to Maryland’s Transquacking River.

Look for a small white bridge and drive to the middle of said bridge. Turn off your car and honk the horn 3 times, wait. Before long you will see an amazing sight. Big Lizz will appear to escort you to the buried treasure.

If the sight of the decapitated slave carrying her own head scares you don’t bother to try to start your car, it will not start. Your only option is to follow the headless specter. Big Lizz will lead you directly to the buried fortune, all you have to do is dig it up.

No one has recovered the loot, perhaps because while Big Lizz will take you to the treasure, she won’t be helping you dig it up. Rather, Big Lizz will be standing just behind you, with her head in one hand and a sword in the other.

Trying to remove the fortune Lizz lost her life hiding could cost you your head. You are free to leave empty-handed however at any time.