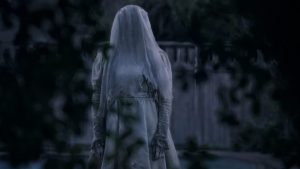 Tales of La Llorona can be traced back for centuries. Her legend has been handed down by oral tradition. While it’s unclear exactly who the real woman was, sightings of her ghost have been well documented.

The legend is said that in a rural village there lived a young woman named Maria. She came from a poor family but was known around her village for her beauty. One day, an extremely wealthy nobleman traveled through her village. He stopped in his tracks when he saw Maria.

Maria was charmed by him and he was taken by her beauty, so when he proposed to her, she immediately accepted. Maria’s family was thrilled that she was marrying into a wealthy family, but the nobleman’s father was extremely disappointed that his son was marrying into poverty.

Maria and her new husband built a house in the village to be away from his disapproving father. Eventually, she gave birth to a son and a daughter. Her husband was always traveling and began to stop spending time with his family. When he came home, he only paid attention to the children and as time passed Maria could tell that her husband was falling out of love with her because she was getting old. One day he returned to the village with a younger woman, and bid his children farewell, ignoring Maria.

Maria, angry and hurt, took her children to a river and drowned them in a blind rage. She realized what she had done and searched for them, but the river had already carried them away. Days later, she was found dead on the river bank. She had committed the two ultimate sins: Murder and Suicide.

Challenged at the gates of heaven for the whereabouts of her children, she is not permitted to enter the afterlife until she finds them. Stuck between the land of the living and the dead, she spends eternity looking for her lost children.

She is always heard weeping for her children, earning her the name “La Llorona”. It is said that if you hear her crying, you are to run the opposite way. If you hear her cries, they could bring misfortune or even death. Many parents in Latin America use this story to scare their children from staying out too late.

La Llorona kidnaps wandering children at night, mistaking them for her own. She begs the heavens for forgiveness, and drowns the children she kidnaps. People who claim to have seen her say she appears at night or in the late evening by rivers or lakes, wearing a white or black gown with a veil.

Some believe those who hear the wails of La Llorona are marked for death or misfortune, similar to the Gaelic banshee legend. Among her wails, she is noted as crying “¡Ay, mis hijos!” which translates to “Oh, my children!” or “Oh, my sons!”

She scrapes the bottom of the rivers and lakes, searching for her sons. It is said that when her wails sound near she is actually far and when she sounds distant, she is actually very near.

In 1550, Doña Luisa de Olveros fell in love with nobleman Don Nuño de Montesclaros. She had two children with him and prayed for the day they would marry. He began to ignore her.

One night, she went to Nuño’s home to confront him. There was a party to celebrate his wedding. He sneered at her when she fell to her knees to ask him why he forsook her.

Although she was an AmerIndian princess, she was beneath his status as a Mexican of Spanish ancestry. She was thrown out of the house. Luisa ran through the streets, insane because of her humiliation. She killed her children with a dagger Nuño gave her, then wandered through the streets, babbling.

The authorities found her, charged her with killing her children, convicted her of sorcery and publicly hanged her. It’s been said her ghost wanders the streets of Mexico City, looking for her children.

Mexico: In 1957, a young Mexican boy was playing by the Rio Grande with two friends. The boy’s friends went home. After dark, the boy saw La Llorona rise out of the water. He heard, “Mis niños,” and froze. The figure approached him and boney fingers grabbed his wrist. The wraith dragged him toward the river. Church bells began to peal and the hand melted away. The boy ran home. He conveyed his ordeal to his mother who didn’t believe him until she saw the marks on his wrist.

New Mexico: Patricio Luganwas a boy when he and his family saw La Llorona walk by a creek, then seemed to float over its water. She started up a hill and vanished. Moments later, she reappeared closer to them before disappearing again. They looked for footprints and found none.

New Mexico: A wailing female spirit has been repeatedly sighted in the Public Employees Retirement Association, PERA, Building, which is built on land that was once an old Spanish-Indian graveyard, near the Santa Fe River. Many PERA employees have heard her weeping in corridors and felt unseen hands push them on stairways. They believe she is La Llorona.
La Llorona, Legend or Paranormal?

Many have heard her wailing at night by rivers. Some Mexicans believe she will forever be with them when they move by rivers. They fear her because they think she might lure children into the river after dark.

Luisa might have been the basis for La Llorona legends, although she stabbed her children. It could be that someone, in the past, thought it would be more interesting to say she drowned them.

It’s possible that another woman existed who drowned her children. The fact is that people of various ethnic groups have seen what is believed to be La Llorona. Is it possible there are two La Lloronas?