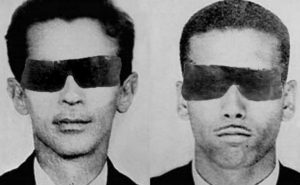 Niterói, a small community on the outskirts of the sprawling Rio de Janeiro metropolis in Brazil has a intriguing mystery. Two electrical engineers were found dead wearing raincoats and lead masks, carrying a scrap of paper with a cryptic note. Welcome to Vintém Hill and the case of the lead masks…

On August 17th of 1966, Manoel Pereira da Cruz and Miguel José Viana left their home town of Campos dos Goytacazes telling neighbours and family that they needed to purchase materials for work.

Later evidence told that the two had purchased their waterproof coats in Goytacazes. They had also purchased a large jug of water from a nearby café, and when interviewed by authorities the café’s waitress stated that Miguel was “very nervous,” saying that he frequently checked his watch in a distressed manner as though in a hurry.

Three days later on the afternoon of August 20, the two were discovered dead at the top of Vintém Hill, or Morro do Vintém by a young boy out flying his kite.

The positioning of their bodies was described as orderly, lying next to each other flat on their backs, dressed in proper formal attire which was covered by their waterproof coats, and wearing lead masks.

They had with them the bucket of water and a small amount of towels, but most eerie was the note that read: “16:30 estar no local determinado. 18:30 ingerir cápsulas, após efeito proteger metais aguardar sinal máscara”, which translates to “16:30 (4:30 PM) be at the agreed place. 18:30 (6:30 PM) swallow capsules, after effect protect metals, wait for signal, mask”.

Also included amongst the two men’s possessions were a series of electrical charts the purpose of which to this day have not been determined. Both still had money in their wallets and there were no signs of a struggle, which quickly ruled out a robbery. More so, neither of the two had any visible wounds.

Given Niterói’s and specifically Vintém Hill’s reputation for unexplained phenomenon and UFO sightings, those not prone to believing in such things attributed the deaths to a suicide pact not unlike Heaven’s gate suicides.

Several days later, details of the autopsy were leaked and it was learnt publicly that Manoel and Miguel’s bodies had been found in a mature state of decomposition.

Tracing the duo’s footsteps from Campos dos Goytacazes to Niterói and as well including the long hike up Vintém Hill their arrival at the top couldn’t have been earlier than the evening of the nineteenth – the day before they were found, making that level of decomposition impossible.

Stranger yet was the state of their internal organs which were described as “liquefied”.

The mention of “swallow capsules” in their cryptic note had led to intense investigation hoping to discover poisoning as the cause of death, but in the end all poisons were ruled out.

In fact, the Lead Mask Case has been classified as a Close Encounter of the Fifth Kind and given a 443 SVP Credibility Rating. Despite all of that, there is no one theory that fully explains what happened to Manoel Pereira da Cruz and Miguel José Viana on Vintém Hill.