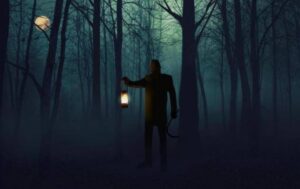 In this latest tale, world-famous paranormal researcher Tom Slemen explores the ghoulish tale behind the lantern man of Storeton Woods…

At 7.15 pm on the Saturday evening of 27 November 1971, two 18-year-olds from Birkenhead – Jo Hartnell and her boyfriend Sam Ormond – managed to get into the local cinema, the Essoldo, to see two X-rated horror films (tame by modern standards) called ‘Twins of Evil’ and ‘Hands of the Ripper’ – both Hammer Film productions.

The double bill finished around 10.30 pm, and the couple left the cinema and went to a local café, where the topic of conversation was influenced by the horror films.

Jo asked Sam if he knew any haunted places they could go to, and the teenager just shook his head and looked at his Timex watch.

“I’d better be cutting home soon,” he said, “My mother will be worried sick if I’m not home by eleven.”

“Oh, where’s your sense of adventure, Sam?” asked Jo, kicking his foot under the table. “You’re getting boring.”

Sam grimaced. “No I’m not; my mum worries about me and she’s on her own tonight because my father’s working nights in his new job.”

“I say we go up to Bidston Hill in the pitch dark and see if there are any witches about,” suggested Jo, and straight away Sam said, “There are no such things as witches; it’s 1971, not 1671.”

“Oh, look who’s just come in – Denny O’Hare – I bet he knows some haunted places,” remarked Jo, and Sam heard the door of the café open behind him, followed by the loud distinctive voices of Denny and his friend Stu.

“Hey Denny” Jo shouted, and Sam noticed she was all dewy-eyed as she addressed O’Hare, “do you know any places where you can go hunting for ghosts?”

“I know loads of places where ‘dis ghosts, why?”

Denny replied, and he went to the counter to buy a bottle of Zing orangeade and spam fritters with mushy peas.

He came over and had the audacity to sit next to Jo, so Sam held her hand across the table and Stu made an irritating rhythmic hissing sound as he forced a laugh through the gap in his front teeth.

Eventually, they all decided to go to Storeton Woods to see the ‘Lantern Man’ – an abnormally tall hooded man who held out a lantern with one hand and wielded a huge sharp sickle with the other.

Denny swore he had seen him, and what made this scary was the fact that Denny was a terrible liar who most people could see through, but Jo saw the goose pimples on his arms rise up and he looked genuinely afraid as he talked of the Lantern Man.

Dim-witted Stu also nodded throughout Denny’s tale about the encounter with the bogeyman of the woods and repeatedly said, “Yeah, ‘nember [remember] that?”

Sam was furious at Jo’s flirting with Denny and he kept telling her his mum would go spare when he got home.

As soon as Denny had eaten his spam fritters (shared with Jo), the four teenagers set off for Storeton Woods.

A fog rolled in from Liverpool Bay, and on the way to the woods, Stu went home and returned with an old red-lensed paraffin roadworks lamp. It threw no illumination whatsoever.

As they all entered the woods, Jo asked Denny, “Are you going with anyone?”

“What’s that?” Stu asked, pointing to something moving by a tree.

It was just a tire, dangling from a branch by a rope.

Jo got into the tire, helped by Denny, and started swinging in it, when Sam noticed the light in the distance.

“What’s that?” he asked, then squinted into the darkness and said, “It’s a man with a light!”

“Yeah, yeah,” a disbelieving Jo told him and continued to swing, unaware that there was indeed a figure holding a torch – or lantern – approaching from behind her.

“He’s running!” gasped Stu, and he turned and ran off, leaving his three associates behind.

Within seconds the giant was upon them; he stood at just under seven feet, and Sam pulled Jo out the tire but she screamed and ended up dangling from it by her feet.

Denny ran away swearing. Something struck the rope the tire was dangling from and sliced through it. It looked like a huge sickle.

Jo landed on her back, and the giant figure bent down, and Jo and Sam saw that it wore a hood with two eye-holes in.

The figure put the handle of the sickle in some holder on a belt, and reached down with its huge left hand to seize Jo by her hair.

The girl screamed as the weird goliath turned and dragged her through the fog enshrouded woods. Sam felt his legs turn to jelly, but somehow he chased after the figure, and he grabbed the handle of the sickle and slid it out of the towering abductor’s belt.

He swung the sickle and its blade went deep into the man’s back. The overgrown brute dropped Jo, and Sam struck him again, leaving the sickle embedded in its back. He and Jo ran off and never stopped running till they reached the girl’s home.

I believe the outsized ogre is still occasionally seen in the woods but who or what it is I do not know.